A legacy of ashes 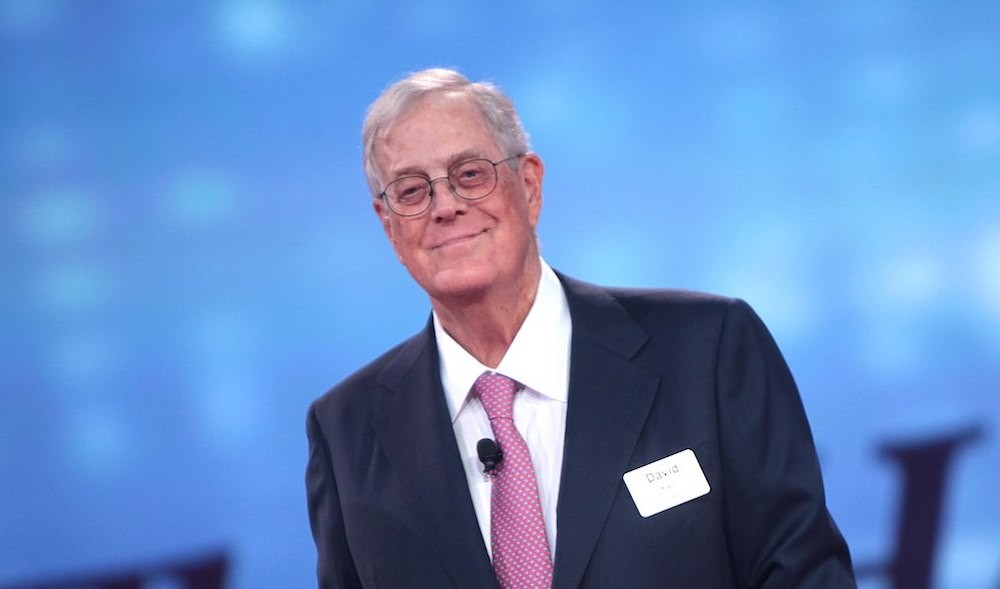 The maxim that we're not to speak ill of the dead is more often than not good advice, though it's complicated by the death of men like David Koch, the oilman and right-wing financier who died last week at the age of seventy-nine.

There's a ghoulish quality to gloating about the demise of one's ideological adversaries before the bodies are in the ground – as HBO's Bill Maher did on his show Friday night – especially in a time in which politics has become a factionalized blood sport. And any polemic about David Koch's decades of funding the far right is likely to draw a two-dimensional caricature of the man, eliding his truly remarkable philanthropy as well as his forward thinking on immigration and criminal justice reform, which, truth be told, was well ahead of many modern progressives. (In 1980, for instance, as a vice presidential candidate on the libertarian ticket, Koch supported open borders.)

But any fair analysis of the world David Koch leaves behind can't help but speak ill of his legacy. The fact is, few Americans in the postwar era have been more destructive than David and his older brother Charles Koch, who survives him. Through the untold millions they lavished on conservative political networks and organizations – founding the Cato Institute, bankrolling the Heritage Foundation, establishing the anti-regulation Mercatus Center at George Mason University and similar centers at Florida State University and Utah State University, creating the Americans for Prosperity Foundation, and funding all manner of anti-union efforts – the Kochs fundamentally reformed American conservatism and, in the process, American democracy.

The end result is the party we see now: beholden to the wealthy and a theology that believes tax cuts are the panacea to whatever ails us, stalwart in its opposition to any and all environmental and labor regulations, and embarrassingly resistant to the climate science that the rest of the world long accepted.

As Sarah Jones wrote in New York this weekend: "The id they unleashed – the naked white nationalism, the anti–big government hysteria, all those conspiracy theories – helped seed the ground for Donald Trump."

There's some irony in that, considering that the Koch brothers were never enthusiastic about Trump, especially his trade wars and harsh immigration tactics. They never donated to him, and earlier this year, AFP indicated that it was open to supporting Democrats, so long as those Democrats were the kind that would keep the party from going in the direction of Elizabeth Warren and the Green New Deal. But in the pursuit of their own interests – in serving their own greed – they'd created a Frankenstein's monster they couldn't control.

They'd grown Koch Industries, a company they'd inherited from their father – an original member of the John Birch Society who admired Benito Mussolini and thought the civil rights movement was a communist plot – into the second-largest privately owned business in the country, with oil refineries in Alaska, Texas, and Minnesota, more than four thousand miles of pipeline, and ownership of products ranging from Brawny paper towels to Stainmaster carpet, as The New Yorker's Jane Meyer reported in her definitive 2010 profile. And they wanted the government out of their way. They've fought health care reform, labor regulations, anything that got between them and a buck.

"The Kochs," Meyer wrote, "are longtime libertarians who believe in drastically lower personal and corporate taxes, minimal social services for the needy, and much less oversight of industry – especially environmental regulation. These views dovetail with the brothers' corporate interests."

The Kochs were one of the top air polluters in the country, according to a 2010 University of Massachusetts at Amherst study. More important, perhaps, they were the biggest funder of climate change denial, surpassing even ExxonMobil.

For decades, Koch-funded groups like the Cato Institute and the Heritage Foundation have tried to pour cold water on the consensus that the world is dangerously warming and humans are to blame. With the Kochs' millions behind them, these organizations fostered skepticism about scientists involved in climate research, claimed that the science is inconclusive, and – as David Koch told Meyer in 2010 – argued that even if the planet is getting hotter, it will ultimately be beneficial.

This was simple avarice dressed up as ideology, of course – regardless of whether David Koch ever admitted that to himself. Accepting the reality of anthropomorphic climate change and its destructive consequences would mean weaning ourselves off fossil fuels, which would make the Kochs' oil empire less profitable.

The last full month David Koch lived to see, July 2019, was the hottest ever recorded on earth. The day he died, the Amazon rainforest was burning at an unprecedented rate, as the right-wing Brazilian government allowed loggers, farmers and cattle interests to slash and burn a region that produces 20 percent of the planet's oxygen and is vital to combating climate change. Three days after he died, the president he inadvertently helped install skipped a meeting of world leaders on climate change at the G7 summit in Paris. Three decades after his death, experts have warned, 55 percent of the global population could live in areas that experience more than 20 days of lethal heat a year, 1 billion people will be displaced from their homes, 2 billion people will lack access to water, and droughts and severe flooding will become the norm.