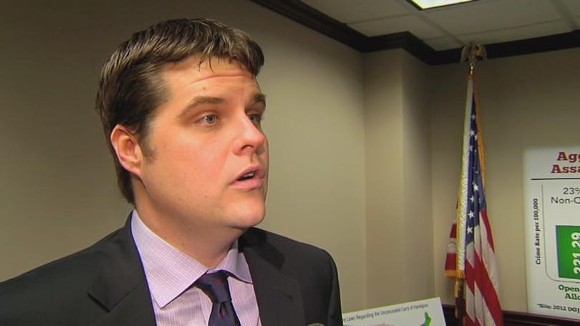 photo via WJHG
U.S. Rep. Matt Gaetz, a Republican junior congressman representing Florida's 1st Congressional District, has drafted a bill that would eliminate the agency pledged to protecting human health and the environment.

In an email sent to colleagues sounding them out for support, Gaetz wrote, "Today, the American people are drowning in rules and regulations promulgated by unelected bureaucrats, and the Environmental Protection Agency has become an extraordinary offender." The email was obtained by the Huffington Post.

It's likely that President Trump will decimate the EPA’s budget. A nimble new site devoted to D.C. leaks, Axios, reported last week that the Trump team's plan for the EPA calls for killing Clean Air Act greenhouse gas regulations for coal and natural gas power plants and the Clean Water Rule (wetlands protection), along with "major reforms of the agency's use of science and economics."

Not enough for Gaetz: He wants to kill it altogether, citing a statistic furnished by GOP policy group American Action Forum that claims “it would take more than 94,200 employees working full-time to complete one year of EPA paperwork.”

We did a little digging over on the Town Hall Project and found that Rep. Gaetz has three public appearances scheduled on Thursday, Feb. 23:
Maybe citizens who don't enjoy drinking poison water or snorting noxious fumes should stop by one (or all) of these events and make their opinions known. We like bowling. Do you like bowling?

Attempts to contact Gaetz's office for comment were unsuccessful. If and when his spokesperson gets back to us to let us know whether any of Gaetz's fellow lawmakers have signed on to this plan, we'll update this post.