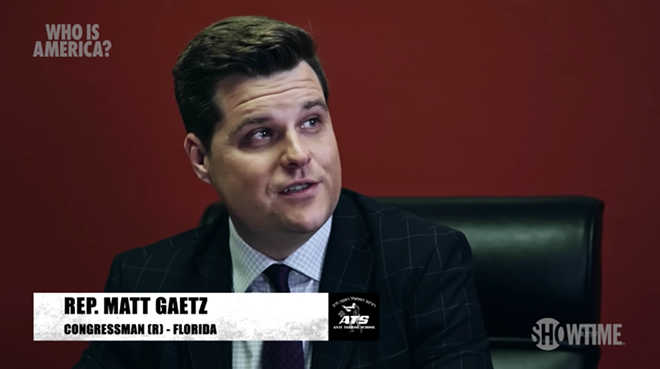 The House Ethics Committee said Friday that Gaetz, a Fort Walton Beach Republican, failed to provide testimony after a complaint from a House member alleged that Gaetz sought to intimidate former Trump attorney Michael Cohen. A statement from the committee said Gaetz was informed on May 16 that its ability to resolve the complaint would be hindered without his testimony. He was given until June 24 to respond or else an investigative subcommittee would be established to review the allegations that “Gaetz sought to threaten, intimidate, harass, or otherwise improperly influence” Cohen.

“Because Rep. Gaetz did not provide the committee with testimony, the committee was unable to dispose of the complaint by the rule-based deadline,” said the statement by committee Chairman Ted Deutch, D-Fla., and U.S. Rep. Kenny Marchant of Texas, the committee’s ranking Republican.

The statement noted the establishment of a subcommittee — to be chaired by U.S. Rep. Anthony Brown, D-Maryland, with U.S. Rep. Michael Guest, R-Miss., as the ranking member — doesn’t indicate a violation has occurred.

Gaetz, a confidant of Trump, didn’t immediately return a request for comment. But in a statement to The Hill, Gaetz defended his refusal to comply with the House investigation.

"If members of Congress want to spend their time psychoanalyzing my tweets, it’s certainly their prerogative,” Gaetz told The Hill. “I won’t be joining them in the endeavor."

In February, Gaetz accused Cohen, who is married, of having “girlfriends” on the eve of Cohen giving testimony to Congress.

"Hey @MichaelCohen212 — Do your wife & father-in-law know about your girlfriends? Maybe tonight would be a good time for that chat. I wonder if she'll remain faithful when you're in prison. She's about to learn a lot...,” Gaetz said in the tweet.

Gaetz later removed the tweet and issued an apology. Critics accused Gaetz of engaging in witness tampering. In May, the Florida Bar sent a similar complaint against Gaetz to a grievance committee, which is expected to spend three to six months reviewing the issue. Cohen started a three-year sentence in May for tax, bank and campaign-finance crimes in a New York federal prison.