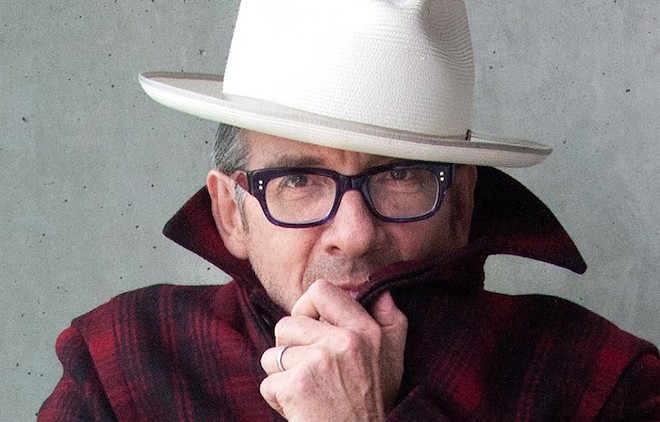 Photo via Elvis Costello/Facebook
Songwriter Elvis Costello thinks that fans have a lot of questions when it comes to his band’s live set.

“Will they play my favorite song?" or “Are they going to frighten the horses with a lot of excellent songs that are rarely performed?” not to mention, “Can I expect the hits of yesteryear and those of tomorrow?"

A press release for an upcoming tour says that the trek’s title, “Just Trust,” is an answer to those questions, and Orlando fans will get a chance to figure it all out for themselves when Costello and the Imposters (Steve Nieve on keyboards, Pete Thomas on drums, and bass and vocalist Davey Faragher all joined by singers Kitten Kuroi and Briana Lee) play Orlando on Nov. 11.

Fans wondering how the 64-year-old legend is doing after his “cancer” diagnosis should see Costello’s comments about how a surgery to remove a small but aggressive tumor got blown out of proportion.

“I’m not going to critique other writers, because I had a very nice conversation with a young man the other day, and 99.9 percent of the article he wrote was really interesting, but he used the word ‘remission’ to describe my health, and therefore his editor decided to put cancer in the headline,” Costello told the Daily Beast.

“I’m not in remission because I didn’t have cancer. How could I be in remission? I was relieved of something that may have caused cancer,” he added. “So out of respect to my friends who recently have lost that particular fight, and to those that continue to have it, of which I have rather too many, I’d rather everyone get the words right.”

The show happens at Hard Rock Live, and tickets go on sale to the public on Friday, June 28, at 10 a.m. Other Florida stops on the tour include Fort Lauderdale (Nov. 7 at Broward Center for the Performing Arts), St. Augustine (Nov. 8 at the Amp) and Orlando (Nov. 11 at Hard Rock Live).


Get our top picks for the best events in Orlando every Thursday morning. Sign up for our weekly Events newsletter.
© 2022 Orlando Weekly