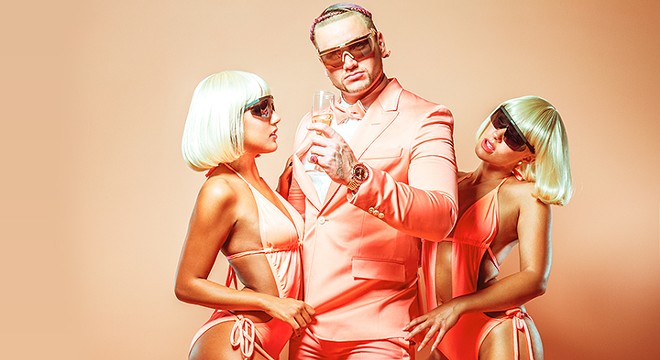 So, you think rap artist Riff Raff’s Internet-famous star is starting to fade, eh? Well, get ready for this – despite all of the OMG-look-at-this-freak-is-he-for-real interviews with hipster blogs (and even some mainstream pubs that deign to pay attention, like Rolling Stone), the husky-and-neon-loving artist also known as Jody Highroller (or Joey Butane or Sharky McStevenson) not only dropped a new album this year, he’s also declared that he’s releasing a movie by the same name: Peach Panther. The album, he’s told a few hip-hop blogs, basically adds up to a 12-track trailer for the movie, which seems to be a cheeseball take on a shoot-em-up gangster piece inspired in equal parts by The Sopranos and Quentin Tarantino starring Riff Raff, Tommy Chong, Sid from Slipknot, Internet gossip columnist Perez Hilton and others. Intriguing as this all may be, it says nothing at all about the quality of Riff Raff’s sound lately, but you don’t really need us to tell you about that – the whole Peach Panther album is out there in the open, on the wilds of YouTube. You’ll either be offended or intrigued, but despite your feelings, you’ll probably regret missing this show because how often do you get to see a Neon Icon in person? Almost never, really. Need even more incentive? If you visit Jody Highroller’s website, it looks like there are still some VIP Aquaberry Experience packages left, which will let you hang out backstage, meet and greet the man himself (no idea if Jody Husky will be on premises) and get a T-shirt. You could be the man. You could be the boss.