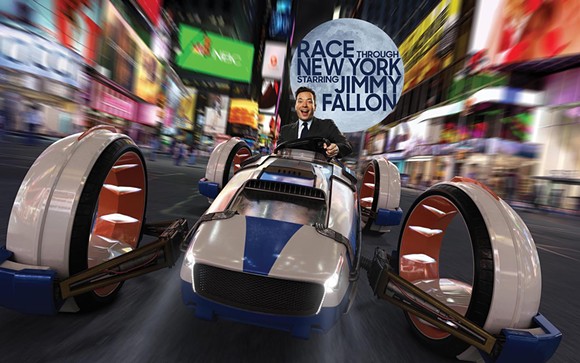 According to Universal's official blog, the ride will begin with a queue based on Studio 6B Club, where guests will be able to watch popular bits from shows like "History of Rap" and "Lip Sync Battle" as well as meet the Tonight Show mascot, Hashtag the Panda.

You'll also be able to send notes to friends and family and play a "Jimmy Drive" retro-style video game.

Photo via Universal Orlando
Once onboard the ride, you'll be seated in what Universal calls a "flying theater," and race Jimmy Fallon through the streets of New York. The 72 guests who can be seated in the theater at a time will witness iconic New York landmarks as well as familiar Tonight Show characters.

The ride was first announced back in 2015. Since then, behind-the-scenes photos have surfaced showing Fallon strapped into a motion capture suit.

Both Universal Studios and The Tonight Show are owned by NBCUniversal.