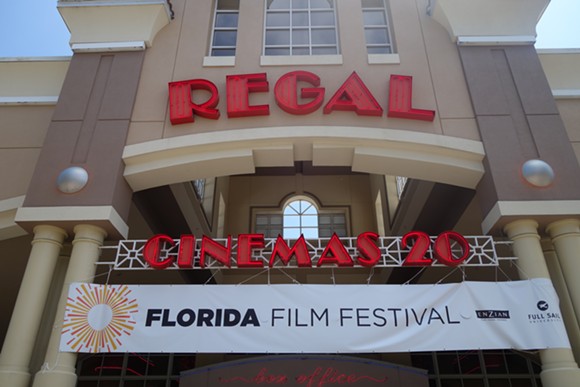 Regal Cinemas Stadium 20 at Winter Park Village is in the middle of a renovation that will install reclining, sofa-style seats with footrests while slashing theater capacity by about 60 percent. The new chairs, similar to those at Artegon Cinemark, will dramatically improve viewer comfort but reduce the number of seats by roughly 60 percent.

All 20 of the building’s theaters will be renovated by January. According to Regal staff, the capacity of the two largest houses will drop from 479 to 168, affecting not just regular theater-goers but future Florida Film Festival patrons as well. The two next-largest screens will see seating capacity lowered from 280 to 140. The two smallest houses will go from 85 to 36. (These numbers include spaces for wheelchairs.)

If you’re wondering why Regal would spend millions of dollars to reduce its capacity, check out this Wall Street Journal article from 2014, which analyzed a similar strategy adopted by AMC Entertainment Holdings Inc.

Though Regal would not confirm whether ticket prices for the new auditoriums would increase immediately, industry analysts expect prices to go up eventually (and more dramatically than at non-renovated theaters). The theater will remain open during the renovations.

The Enzian Theater has not yet announced how it plans to compensate for the potential loss of seats at the 2017 Florida Film Festival. The festival currently uses its own 230-seat auditorium and two houses at Regal (one of the largest and one of the second-largest). Though the Enzian may be expanding to three screens for the 2018 Florida Film Festival, thus slightly reducing its dependence on Regal, the renovations at Regal will affect next year’s festival.

For instance, the total seating capacity for the 2016 festival was 989. But if the 2017 event used those same three screens, that capacity would be reduced to 538. This might necessitate the use of more screens at Regal, perhaps most of an entire wing (similar to the format of the Sarasota Film Festival, which takes over roughly half of downtown Sarasota’s Regal Cinema every year). In addition, the opening-night film would likely move from Regal to the Enzian, as the latter will soon be larger than any of Regal’s screens.

The Enzian declined to comment until they have consulted with Regal Cinemas.