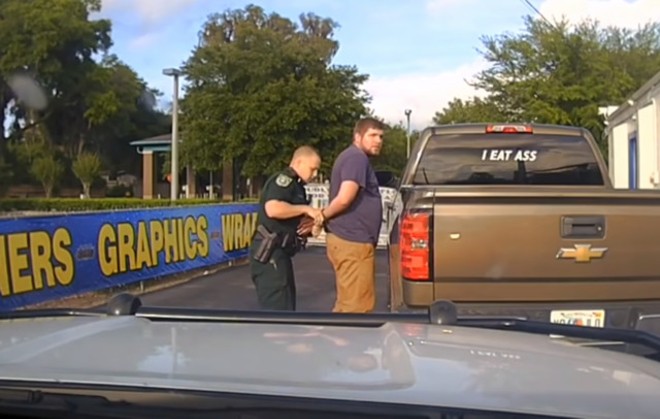 Screengrab via YouTube
Yesterday, Florida officials tossed charges against a Florida man who claimed his rights were violated when he was arrested last week for sporting an "I EAT ASS" sticker on the back of his truck. Now, newly released dash cam footage shows the sheriff's deputy that pulled him over struggling to justify the arrest.

Last Sunday, May 5, 23-year-old Dillon Shane Webb was pulled over on Highway 90 in Lake City after an officer with the Columbia County Sheriff's Office spotted his "I EAT ASS" sticker on the back of his Chevrolet truck. According to the Lake City Reporter, the deputy claimed the sticker violated Florida Statute 847.011, which is a misdemeanor that deals with possession and distribution of obscene material.

But recently released dashcam footage shows the arresting officer struggling to find an adequate reason to arrest Webb, other than he hates "the derogatory sticker."

"How is that derogatory?" asks Webb. "How is it not derogatory?" responds the deputy. "Some 10-year-old little kid sitting in the passenger seat of his momma's vehicle looks over and sees 'I EAT ASS' and asks his mom what it means; how is she going to explain that?"

"That's the parent's job, not my job," Webb responded.

After issuing a court date, and telling him to remove one of the letters from his window so it would say "AS," Webb declines, and states that his First Amendment rights are being violated. The deputy then goes into his squad car and calls another officer to help justify why he pulled over Webb in the first place.

Webb was then arrested for resisting without violence and possession of obscene materials. He was later released on a $2,500 bond.

Yesterday, Assistant State Attorney John Foster Durrett stated that all charges against Webb have been dropped, and that his "I Eat Ass" sticker is indeed protected by the First Amendment.

"Having evaluated the evidence through the prism of Supreme Court precedent it is determined the Defendant has a valid defense to be raised under the First Amendment of our United States Constitution. Given such, a jury would not convict under these facts," said Durrett in the letter.

Webb's lawyer, Andrew Bonderud, told BuzzFeed News that his client is a courageous and brave man for standing up for his right to tell the world his love for eating ass, and that they are now considering "a number of potential claims" against the sheriff's office.

"I think it was brave of him to refuse to take down what he thought was protected speech," Bonderud said. "I think it showed courage on his part."