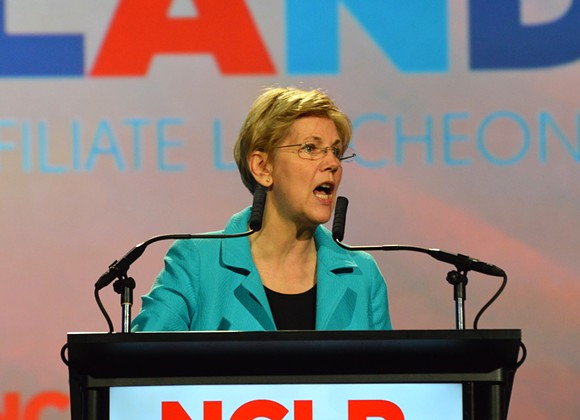 Photo by Monivette Cordeiro
For U.S. Sen. Elizabeth Warren, there aren't enough characters on Twitter to describe Republican nominee Donald Trump, so instead she took to the stage at the National Council of La Raza conference in Orlando, unleashing a burning indictment of the businessman to about 300 people.

Calling Trump a "loud-mouthed fraud," "thin-skinned" and "a man with cash in his hand and hate in his heart," Warren says presumptive Democratic nominee Hillary Clinton and her running mate Tim Kaine must be the next president and vice president respectively.

"Trump will never be president of the United States," she says to the cheering crowd inside the Orange County Convention Center. "...Racism, sexism, homophobia, hatred, injustice and bigotry have no place here. We will never build Donald Trump's stupid wall!"

Warren came out strong against predatory financial practices that hit Latinos and African Americans harder. She also called for reforms for the Latino community in regards to minimum wage, sick leave and health insurace. Warren adds that while communities of color were targeted during the housing crisis, Trump was excited for the real estate crash for business purposes.

"We cannot be a country ruled by a man whose idea of inclusion and unity is to call Mexican Americans rapists and killers and then tweet about eating a taco bowl for lunch," she says. "There's a lot of hatred and division in America right now...This is not the future we want for our children."

NCLR usually invites presidential candidates to its conferences but chose not to do so this year because of Trump's "indiscriminate vilification" of the Latino community.