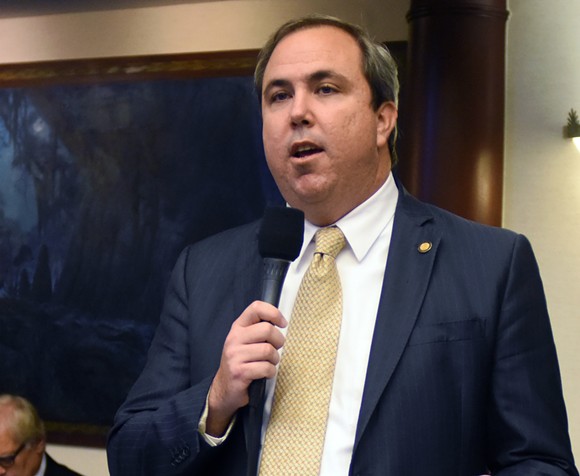 Photo via Florida House of Representatives
A hard-line group that wants to “defeat immigration anarchy” in Florida influenced the drafting of a Senate proposal that would ban so-called sanctuary cities, one of the legislative session’s most politically charged fights.

A bill sponsored by Sen. Joe Gruters, R-Sarasota, would give the attorney general authority to take action against local governments, an approach suggested in January by a lawyer for the group Floridians for Immigration Enforcement, according to emails obtained by The News Service of Florida.

In addition to the bill reflecting the suggestion about the attorney general, a Senate staff analysis also includes a controversial list provided by Floridians for Immigration Enforcement that labels 15 municipalities as “sanctuary cities” —- or what the group calls “anarchy cities.”

Gruters’ office worked with David Caulkett, the organization’s vice president who also serves as a Florida adviser for another hard-line group, the Federation for American Immigration Reform, or FAIR.

Caulkett told the News Service of Florida that his group, which he says is an “anti-illegal immigration” activist group, worked closely with Gruters in the drafting of the bill (SB 168), but he refused to provide details on specific language discussed between the group and the senator.

“Of course we helped,” Caulkett told the News Service. “How influential we were? I don’t know. I can’t say.”

A glimpse of those discussions, however, can be seen in emails between the group and the senator’s office, including how the group warned Gruters that distributing the list of 15 municipalities could cause problems if spread widely.

“Per Senator Gruters’ request, the list of sanctuary cities in Florida, or as I call them Anarchy Cities, is attached … (Floridians for Immigration Enforcement) suggests you consider not widely distributing the list as that would just create problems,” Caulkett wrote to Joshua Barnhill, a staff member in Gruters’ office.

Gruters still shared the information, and it was included in a staff analysis of the bill, along with the research of another controversial group, the Center for Immigration Studies, or CIS. The move, as Caulkett predicted, caused problems in committee hearings.

“Do you know or did you know that CIS and FAIR are anti-immigrant hate groups?” Sen. Janet Cruz, D-Tampa, asked Gruters on March 12 during a committee meeting. “How did this happen in our analysis?”

“That’s the first time I have heard them characterized as anti-immigrant hate groups,” said Gruters, who doubles as chairman of the Republican Party of Florida.

The Southern Poverty Law Center website categorizes the Center for Immigration Studies and FAIR as a “hate groups” because John Tanton, who helped form the groups, has “expressed his wish that America remains a majority-white population: a goal to be achieved, presumably, by limiting the number of non-whites who enter the country.”

Pushing back against that “hate group” label, the Center for Immigration Studies filed a lawsuit in January, arguing the organization has been damaged by the “conspiracy to falsely call it a hate group,” court records show. Caulkett told the News Service that the Southern Poverty Law Center is a “scumbag organization” and that it’s “laughable” to be labeled a “hate group.”

Gruters said Caulkett’s group “did not contribute anything toward the language that is in SB 168.”

But the group’s attorney in January suggested changing a provision that would have given authority to state attorneys to ensure local governments don’t limit cooperation with immigration authorities. The attorney made a recommendation to “drop State Attorneys so just the Attorney General handles prosecutions,” emails show. Gruters' bill currently has the attorney general handling enforcement, which Attorney General Ashley Moody supports.

“We understand that the association of State Attorneys, FPAA (the Florida Prosecuting Attorneys Association), will oppose the bill as written,” Caulkett said in an email.

An effort by the group to have more language included in the bill, but Gruters’ staff put it through the bill drafting process. In a January email, Caulkett attached two bills to an email and asked to “get the bills into bill drafting ASAP.”

“Thanks for sending over, David. I put them both in bill drafting earlier this morning,” wrote Barnhill, the Gruters staff member, in a Jan. 23 email.

That language did not make into the bill.

When asked how involved the group was with the bill, Gruters told the News Service of Florida said it has no involvement, “other than as advocates.” Gruters said bill language was adjusted based on discussions with Senate Judiciary Chairman David Simmons, R-Altamonte Springs, and Pinellas County Sheriff Bob Gualtieri.

Anti-sanctuary city proposals in the House and Senate have sailed through committees this year. The Senate has moved faster than in previous years, when attempts to pass the measure failed. In the House, the bill now has only has to clear one more committee.

House sponsor Cord Byrd, R-Neptune Beach, said he has worked with Gruters and Gualtieri, adding there was “no coordination with outside groups” to amend the House bill (HB 527).

Byrd’s bill includes tougher penalties for local governments that do not comply with federal immigration authorities, including allowing lawsuits against local governments if undocumented immigrants are freed and kill or injure people.

Sensing that Republican lawmakers, with the help of Gov. Ron DeSantis, are more receptive to cracking down on illegal immigration this year, Caulkett said he is hopeful Florida will “defeat immigration anarchy.”

“And please quote me on that, we are not fighting sanctuary cities, they are anarchy cities,” Caulkett said. “Not only do they disobey the law, but I question their loyalty to this country.”