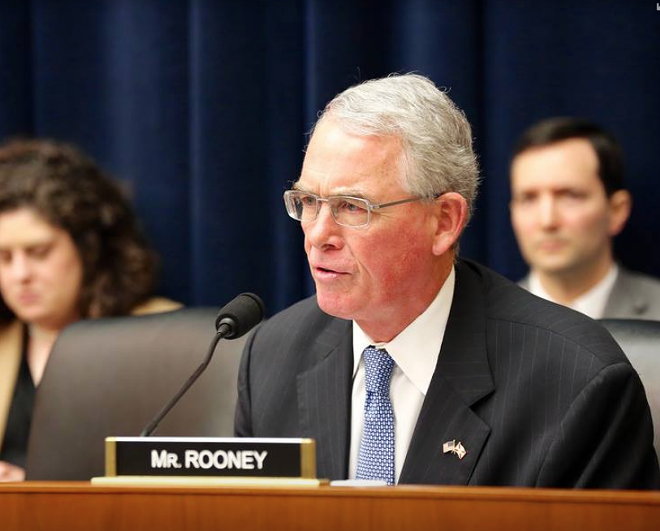 HR 1672 would amend the Higher Education Act of 1965, which allows political expression in outdoor areas on high education campuses. The announcement of the legislation comes just after President Donald Trump, a fellow Republican, is expected to sign an executive order that would force universities to "support free speech" or face "very costly" penalties, as in funding cuts, which essentially reinforces the rules governing colleges as is.

"Many colleges and universities use dangerous and insidious methods to suppress free speech. One example is 'free speech zones,' which are specifically delineated areas on a campus where 'free speech' is allowed, converting those words into a oxymoron," Rooney argues in announcing the bill. "An absolute truth, a right guaranteed under the Constitution, should not become a negotiable, transient issue of policy."

Rooney adds: "When we go down the road of dismissing or flouting elements of the Constitution we are damaging the institutions which have flourished under it and risk inviting similar attacks on other constitutional rights."

Rooney points to an example at the University of Cincinnati, where the free speech zone comprised only 0.1 percent of the 137-acre campus and required up to 15 business days notice for students to use the space.

In 2012, in University of Cincinnati Chapter for Young Americans for Liberty v. Williams, the federal district court ruled that the university's free speech zone violated the First Amendment due to failing to demonstrate a compelling interest in justifying the exclusion of free speech activities from other areas of the campus.

Rooney also notes an incident at Kellogg Community College in Michigan in 2016, in which students were arrested for handing out copies of the U.S. Constitution without the administration granting permission to do so.

Though the Kellogg Community College never admitted to any wrongdoing, it agreed to pay $55,000 to settle the lawsuit in federal court.

Rooney's bill is similar in language to a piece of legislation passed in Florida and signed into law last year.

Free speech rights are a prickly issue. The ugly end of the constitutional protection snuck into the conversation again in 2017, when white nationalist Richard Spencer – later one of the chief architects behind the infamous Charlottesville rally – was initially denied the opportunity to speak on the University of Florida campus.

The university ultimately relented, citing how it could not deny a public speaking permit that it would issue to another group.