This month's Remix is best accessorized with a shoulder-clawing parrot, or maybe just a striped T-shirt: Some say the Gimlet was named for British Royal Navy surgeon Sir Thomas Gimlette, who purportedly prescribed a mixture of gin and lime juice to British sailors to prevent scurvy. There's no proof of this; however, the association between cocktail mixtures and medicinal apothecary preparations is long established (most notably the Sazerac cocktail and various amari; Warren Bobrow's excellent 2013 book Apothecary Cocktails: Restorative Drinks from Yesterday and Today delves into deeper historical detail on the subject). 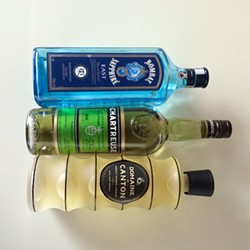 Shoulder parrot or no, the Gimlet is dead simple – gin and lime – but proportions and sweetening agents vary by recipe. The Navy version, if that origin story is true, likely would have been just gin and lime juice, no sugar, but early recipes oriented toward recreational drinking tend to call for gin and bottled Rose's Lime Juice. Some mixed it in equal proportions, but (shudder) that's a lot of syrup in one drink; more prudent mixologists go with a 3:1 or 4:1 ratio. Another wrinkle is the fact that these days, bottled Rose's Lime is mostly corn syrup with a nice sprinkling of preservatives – things no self-respecting craft cocktailer would tolerate in their vintage coupe. So you'll see some bartenders substituting fresh lime juice and simple syrup or, in a nod to tradition, corn syrup and all, going half-and-half on Rose's and fresh lime.

But this Remix tacks pretty far off course from the classic. Few of us are in danger of scurvy these days, but still, we all seem to obsess over green juice lately – so, since I had some celery around and thought its spicy vegetal flavor would suit gin's botanical notes fairly well, I got out the old Breville and made some celery juice. (Juicer versus blender: Neither is quicker than the other; it's just a matter of when you'd like to spend the time. The juicer is quick to produce the juice, but takes forever to clean later. The blender requires more time up front – puree, then strain – but, especially if you blend in a Mason jar, post-mixing cleanup is negligible.) 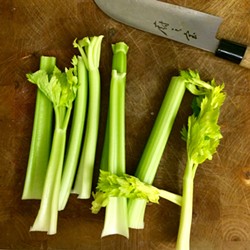 Then, since ginger's warmth suits celery's so well, I thought I'd add some Domaine de Canton ginger cognac, for another layer of flavor with a hint of sweetness, instead of an overpowering syrupy sweetness. Green Chartreuse tied it all together – herbaceous like the celery juice and gin, just bitter enough to underpin the spicy-sweet Domaine de Canton, and almost complex enough to tame the acidic punch of fresh lime. In the end, I had to bow to custom with just a hint of simple syrup to smooth out the lime, but those who enjoy a very tart beverage can skip it.

Add both ingredients to an ice-filled shaker. Shake, then strain into a chilled cocktail glass. Garnish with a lime wheel or wedge.

Add all ingredients except the bitters to an ice-filled shaker. Shake, then strain into a chilled coupe. Add the bitters, then garnish with a very thin slice of lime.