Down in the hole 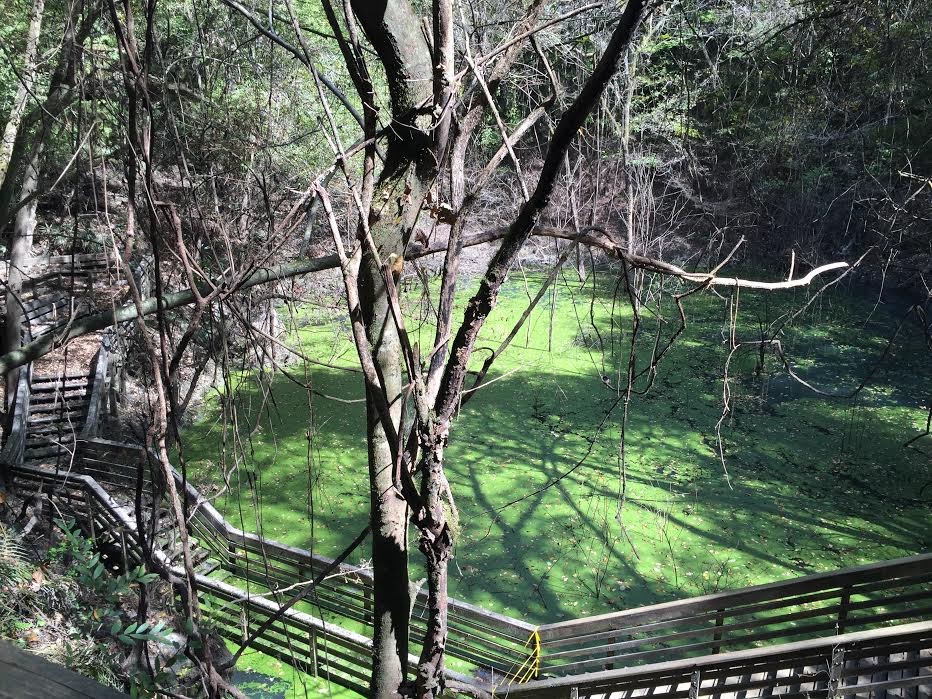 Many years ago on a trip out west I looked out the window of the plane and noticed the ground looked ... wrong. It was lumpy and wavy, the way tousled hair might look if you were a louse looking down on an expanse of tresses.

"Those are mountains," my seatmate told me.

I had been in Florida for too long. That phrase is going on my tombstone, followed by "Going to Hell to cool off."

It's February here now, and already the thermometer is audaciously darting into the 80s, but if you want to take a nice little outdoor road trip before it gets even warmer, this would be the right time to check out the Devil's Millhopper Geological State Park in Gainesville.

This state park with the badass name makes a perfect little get-out-of-O-Town excursion, a cool outdoor day visiting a National Natural Landmark that has drawn curiosity-seekers for the past 130 years, according to state park literature. The geological formation is actually a sinkhole, thought to be 20,000 years old and 120 feet (36.5 meters) deep. Think of the height of a 13-story building, but going the other way. The name comes from the funnel shape of the sink, like a hopper used to funnel grain into a gristmill; the bones and teeth found in the sink (fossilized remains from prehistoric creatures) prompted the idea that the funnel "fed bodies to the devil," says a park brochure. Wicked.

A sinkhole is a natural collapse of surface land, something known to swallow both Porsches (which actually happened when a sinkhole opened up in Winter Park in 1981) and people (a Tampa man, Jeff Bush, was swallowed up by one in 2013; it reopened two years later). Knowing that, it might not sound like the brightest idea to wander down into one, but according to a map in the 2007-2008 Florida Almanac the areas of Florida with the worst history of sinkhole collapse include "much of Orange County."

As Ted said to Bill, "That's us, dude!" So it would seem you're probably at as much risk here as you would be anywhere.

When I first heard about this place I was nervous about walking deep into what I imagined would be a barren, forbidding blankness, but the Devil's Millhopper is lush, verdant and teeming with life. A short trail that circles the park has a markedly different landscape, like walking through sandy woods, and then when you descend into the sink – on a nice civilized wooden staircase – it gets greener with every step. The massive sun-dappled ferns, rocky passages and pale green duckweed covering on the water in the bottom of the bowl make it feel so ancient you can't help but wonder what kind of prehistoric animals have lived here across the centuries; indeed, the sink is famous for yielding those  sharks' teeth and other marine fossils that speak of our state's underwater past.

And at the very bottom, flowing into the pool, is something I never thought I'd see in Florida: a waterfall.

No kidding, a waterfall, and the tranquilizing peace that goes with the sight and sound of such a thing. It's just too heavenly for something named for the devil.

The climb down is 110 percent worth the climb back up.

So we may not have mountains, or even what people from textured places consider hills, but dammit, Florida is not entirely flat. It just depends on where you go and whether you look up.