Orlando's music calendar was hardly sleepy when I joined the staff in January 1991. We focused on listing shows and highlighting original music, and the synergy between Orlando Weekly and clubs, promoters and players was evident. In August 1991, the first Lollapalooza (Jane's Addiction headlined) drew 27,000 fans to Central Florida Fairgrounds. By spring 1992, the Edge opened downtown, booking national acts and giving late-night residency to DJs like Icey and Kimball Collins, which was the dawn of Orlando's globally lauded electronic dance music scene.

By 1997, new owners Alternative Media Inc. brought bragging rights to the Detroit Music Awards. Staff became enthusiastic that Orlando music was a thing to boast about, too. By then, Sam Rivers and his "acid jazz" collaborators were regulars at Sapphire Supper Club, and Rob Thomas had been steaming up clubs like J.J Whispers and the Junkyard in Casselberry for years. It helped us decide to strike quickly when Jam magazine ended its seven-year Jammy Awards tradition.

We organized the inaugural Orlando Music Awards based on the Detroit Metro Times model, inviting musicians, promoters, club owners and assorted music folks to form a board that set the ground rules for categories, nominations, judges and voting, with winners elected by OW readers. The mission: "To recognize and celebrate the Central Florida music scene, and to help nurture and promote the careers of independent area musicians." Hundreds of people got involved, and the board meeting discussions were spirited, to say the least. The galvanizing effect was the ultimate satisfaction – who knew there were so many different kinds of music and musicians to be championed?

From 1997 to 2002, the special issues devoted to the music awards published under editor Jeff Truesdell and the CD produced every year by Mark Padgett created a capsule of Orlando sound. The awards parties – one-night productions that grew in size each year – moved from the Sapphire Supper Club to the Club at Firestone to House of Blues to Hard Rock Live, thanks to business partners. But the OMAs were never moneymakers and practical concerns put them on hiatus. 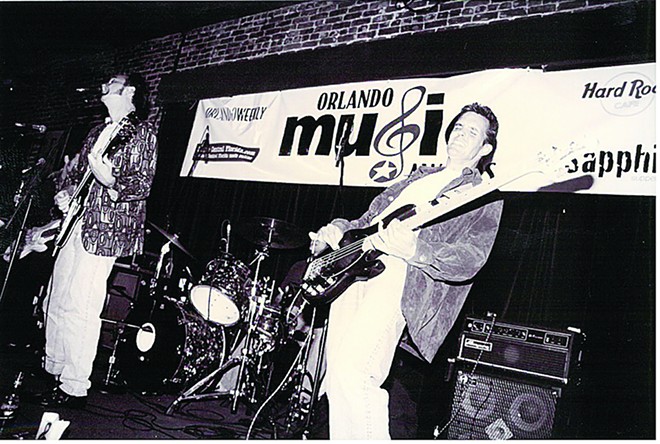 The OMAs' too-short, ambitious burst celebrated hometown acts for who they were and what they brought. The awards process endured the pop music monster that brought Orlando national attention for the Backstreet Boys and NSync, bands that had no actual ties here. Maybe the OMAs overreached, but at the time when outsiders were paying attention to the sounds coming "from" Orlando, the Weekly championed what was next.

The Orlando Music Awards CD's 16 tracks led with "At the Strip" by Swingerhead and ended with "Don't Say Goodnight" by Rocket 88, both bands emblematic of the days when swing and rockabilly ruled the day. The liner notes read: "This is not a compilation of nominees and winners, although some are included. Rather, it intends to showcase the diversity of an original local music scene – hip-hop to hard rock, swing to ska, folk to funk and techno. These are the sounds of our city."

The Club at Firestone

This was the year after Orlando's City Council passed the "anti-rave" bill, due to citizen complaints about kids streaming out of clubs as church services started. Meanwhile, the Southern rock sound was going pop on the airwaves, and Orlando bands were getting signed to major labels.

The Club at Firestone

Growing sophistication is reflected in the CD selections: Sam Rivers' RivBea Orchestra playing "Colours," Gargamel growling "Midnight Sexy," plus avant-rockers Obliterati with "Believe Me," co-produced by Q-Burns Abstract Message, whose own track "... Here for the Both of Us" also appeared, courtesy of Astralwerks.

Sanford rhythm and blues was represented by Noble "Thin Man" Watts, a yearly favorite, who dusted off "Digging In" for the CD, showcasing his tenor saxophone. Collaborators Beef Wellington and Swamburger contributed "Better 2 Groove." The 69 Boyz dropped jaws at the OMAs ceremony with a 12-minute, Bollywood-scale hip-hop production, featuring more than a dozen flag-wavers to complement the bulging arsenal of rappers, dancers and hype men and women on the suddenly small stage.

The Joint Chiefs rocked the CD with "Girl Can't Take It," co-written by local superstar Eugene Snowden of Umoja fame. The piano-driven Amy Steinberg's irreverence and eclectic performances were represented by the song "Begin," which cued the cult of Amy and a new force of women on the otherwise male-dominated music scene.

Though there was no CD produced, the production quality for the awards show was at its zenith, as were drunken onstage antics. Excellent music included hyperactive sets by Andromeda, Indorphine and Supervillains, catching praise from OW's new music editor Jason Ferguson. It wasn't long before he and new editor Bob Whitby folded the Orlando Music Awards into Best of Orlando.

Lindy T. Shepherd worked for Orlando Weekly for nearly two decades from 1991 to 2010, serving as calendar editor, arts editor, web editor and all the roles she filled in between.
© 2022 Orlando Weekly