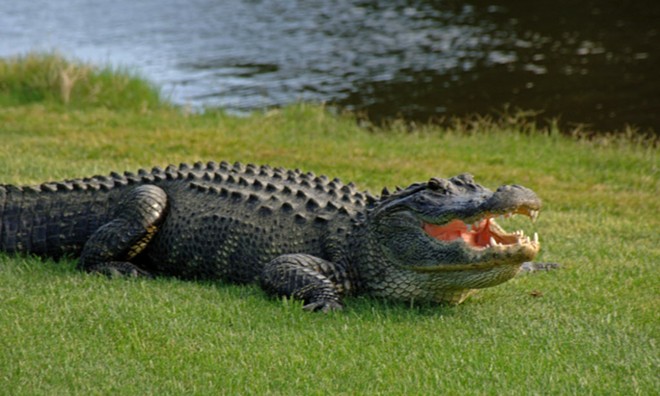 Photo via USA Today
Brevard County authorities are claiming an 11-foot alligator caught and killed a burglary suspect that was fleeing from deputies.

As first reported by WFTV, witnesses in Barefoot Bay called authorities on Nov. 13 after seeing two suspicious men dressed in black casing the backs of homes. When Brevard County deputies arrived, the suspects ran into the woods.

One of the suspects, Mathew Riggins, was reported missing the next day. However, his body was found on Nov. 23 in a nearby lake.

While recovering the body, dive teams encountered an 11-foot gator, which was later caught and killed by Florida Fish and Wildlife. Authorities identified Riggins' body on Monday, Dec. 7  and are saying his wounds are consistent with an alligator attack and his remains were found in its stomach, reports WFTV.

“So at that point, we had a belief that he was probably attacked by the alligator when he was trying to get away from police,” Maj. Tod Goodyear of the Brevard County Sheriff’s Office told the station.

According to WFTV, Brevard County deputies have located the other suspect, but he is refusing to cooperate with the investigation.

Brevard county is on a streak of weird news as of late. Just last week a 9-foot anaconda was caught and killed and this week, Sheriff Wayne Ivey is playing "Wheel of Fortune" with wanted suspects.