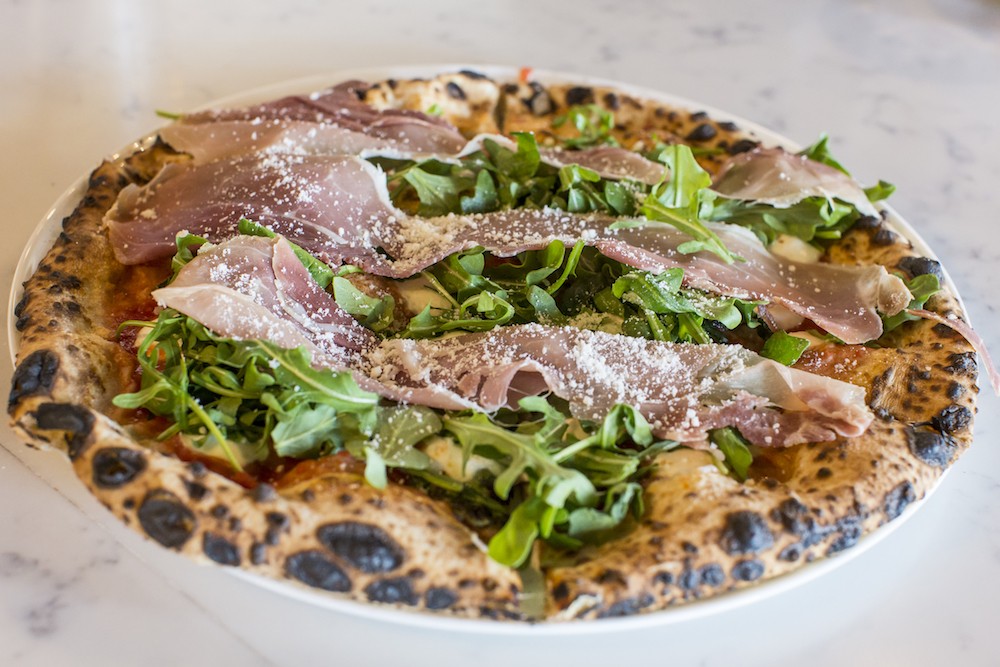 Leave it to Midici to spread the gospel of Neapolitan pizza to middle America and all points north, east, south and west. This is a "Neapolitan Pizza Company," after all, and introducing thin crusts with a raised and blistered cornicione to all the Joe and Jane the Plumbers out there is their reason to be.

Here in Orlando, we've been privy to Neapolitan-style pies for a while – Piazza Italia in Lake Nona, Pizza Bruno on Curry Ford, Prato in Winter Park and others. The gorgeous rounds served at Midici inside the Maitland City Centre adhere to strict Neapolitan pizza-making standards, using finely milled Caputo "00" flour for the dough followed by an in-house ferment. That dough is stretched, pulled, topped, then wood-fired between 850-950 degrees before being plated in just 90 seconds. The pies here come sliced, but they're just 12 inches, so there's really no need for the fork-and-knife method, though if you fancy yourself a hard-core purist, an unsliced pie can certainly be accommodated.

And Midici (Italian for "you tell me") lays it all out in front of you. Half the restaurant comprises an exhibition kitchen, proffering close looks at the Acunto Napoli oven and the pizzaiolos and pizzaiolas working on pies as you snake your way to the order counter. What's not advertised at this counter-service establishment is that table service is offered, but only at the six seats at the bar. And even though the immovable – and awkwardly placed – table lamps affixed to the counter can be a bit of a nuisance, it's where I choose to sit if I'm dining in.

Though pizzas are the stars at Midici, on one visit I did happen to catch Marcello Mastroianni and Sophia Loren: Too Bad She's Bad and other Italian cinematic classics are projected onto the back wall, which is a nice touch. We caught glimpses of the comedy in between nibbles from the meat and cheese plate ($16.95). The spicy Italian salami was no laughing matter, nor the black truffle cheese, rosemary ham and prosciutto. Watching Sophia Loren slink about the beach as we dipped cubes of Parmigiano-Reggiano into honey seemed a bit too suggestive, even for us. So we placed all focus on the food – a sobering walnut and gorgonzola ($10.45) salad followed by a perfectly blistered and crusted margherita pizza ($9.95), my Neapolitan pie of choice.

Now that was a looker. On my very first visit, the crust was a bit flat and dense, likely a result of underproofing. On every subsequent visit, however, it's been (leopard) spot-on, and I'm usually able to polish off an entire pizza by myself. Sometimes I'll add red chilies to it for $1 more.

Under the "Specialty Pizza" category, a few are listed as being available "New York style." Santa Cleopatra! At a Neapolitan pizzeria!? We shunned protocol and shook hands with the devil – the Devil's Pizza in the New York style, that is ($12.95). Its crust, marginally thicker and not nearly as airy, is sprinkled with shredded mozz and a seasoned sauce along with spicy house-made sausage, spicy salami and those red chilies. 'Tis a great pizza, but filling. Owner Joe Roberts thought about nixing the New York-style offering, but it proved too popular with the take-out crowd. Calzones are also popular – and after gorging on one stuffed with Angus beef meatballs and provolone ($10.45) I can see why. And while you're stuffing yourself, stuff a scoop of mango sorbetto or double-chocolate gelato into your bocca.

Thinking of an affogato? Don't. You won't find a barista pulling shots from a striking Victoria Arduino espresso machine here, as you would at the Midicis in Kissimmee and Daytona. Hope that changes. There's also only one oven (as opposed to two at most other branches) due to space limitations. But like all Midicis, you will find a tree sprouting in the middle of the dining room. It's a symbol of tradition, authenticity, growth and life. And if it falls, well, midici.