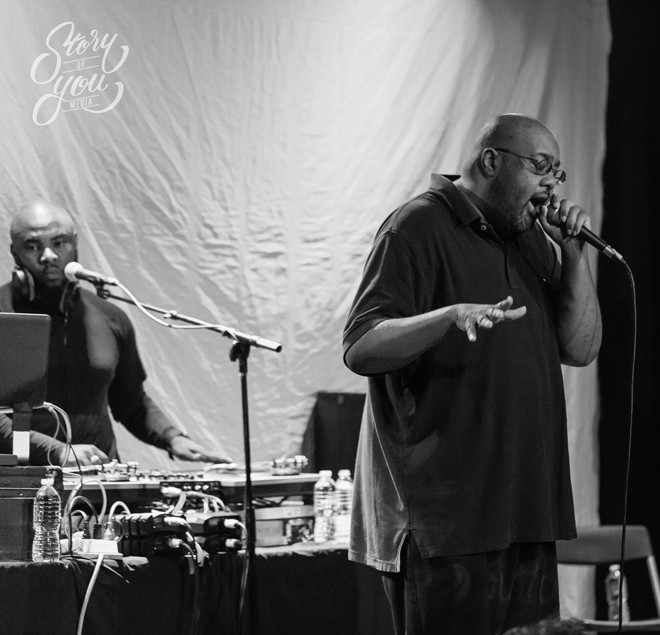 Photo by Story of You Media
Blackalicious at the Social
After many years of pursuing individual efforts, West Coast underground rap kings Blackalicious are back in effect and will be dropping their first album in a decade on September 18. Imani Vol. 1, the first of a trilogy to be rolled out in the next two years, is a class return that features a notable and musically robust guest cast including rappers (Lateef, Lyrics Born, Watts Prophets’ Amde Hamilton), singers (Zap Mama, Imani Coppola) and bands (Monophonics). It’s big enough news on its own but even bigger considering the context of serious health issues (rapper Gift of Gab has been reeling from kidney failure since 2012) that has defined their latest chapter.

Photo by Story of You Media
Blackalicious at the Social
In the ramp up to the big release, they rolled through and shined their light brightly (Aug. 11, The Social), though not necessarily in ways expected. Gift of Gab’s famously dense rhyme architecture is a technically demanding thing, and it requires not just advanced skill but peak fitness, which wasn’t always there for him. Besides rest breaks where support MCs Jumbo (of Lifesavas) and Lateef stepped in to carry the action, Gab’s flow, though fluid, occasionally lagged, faring much better a cappella than alongside the unforgiving rigidity of programmed beats.

But, this time, the story isn’t about the finer points of execution. This isn’t some immaculate fairytale where the hero rides to sweeping and perfect triumph. It’s the one about the real-life grit of getting back up after being knocked down and close to out. And that sheer gut and indomitability of spirit was a sight worth seeing. From not just the attendance but the vibe, Gift of Gab’s verses have clearly carried many in this room over the years. This night, I think Orlando returned a little bit of that strength.

Photo by Story of You Media
Blackalicious at the Social
Opening was NOLA’s New Breed Brass Band, who came with not just the full pomp and spectacle of an eight-man crew but, most importantly, some fresh angles on the brass band tradition. As their name suggests, they carry the heritage with some contemporary steps like hip-hop, funk and R&B. It’s a young reboot, but the spirit is still very truly New Orleans.