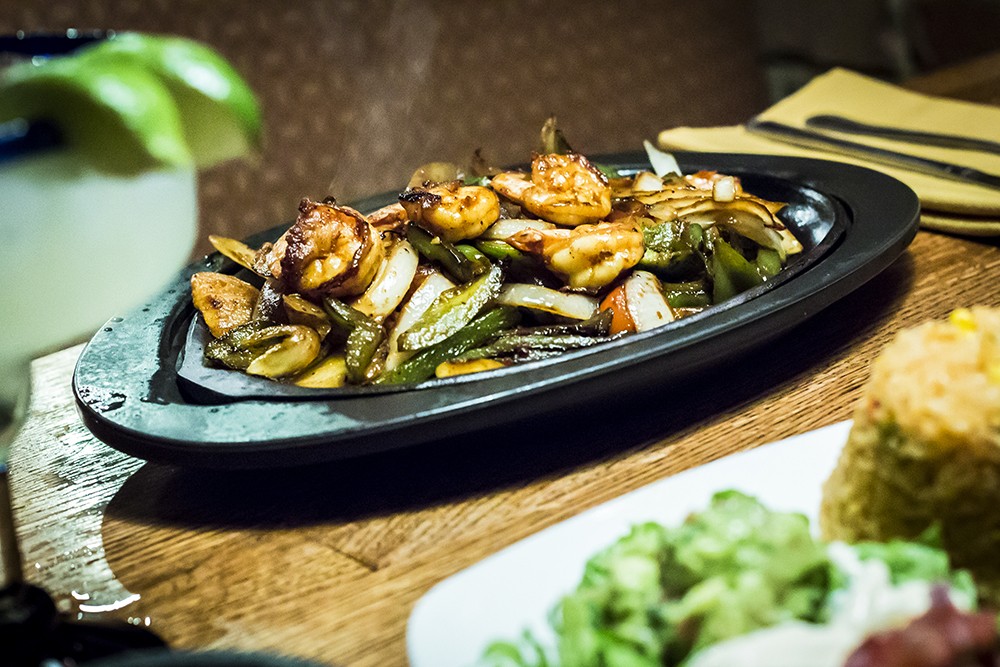 Things got off to an odd start at El Patron. There were more than a few empty booths and tables inside the sizable tourist-sector restaurant, but the wait, we were told, was going to be 25 minutes. "The kitchen's backed up and a couple of servers called in sick," said the harried hostess, who, we soon came to learn, was actually the bartender. Turns out she, too, wasn't feeling very well, and her GI distress gave us cause for concern – this was a Mexican restaurant, after all. So, with a fair amount of trepidation, we took seats at the bar and distracted ourselves by watching various football matches. Margaritas of the muy grande variety were consumed and anxieties were, eventually, allayed.

"The basis of a good Mexican restaurant," declared my dining comrade, "hinges on the quality of the chips and salsa." Given a good portion of his life was spent in Arizona and California, I wasn't going to question the criteria, or his methodology. Besides, the chips – warm and crisp – were quite satisfying, as was the mild but hearty salsa. We asked for a spicier dip, and what they brought out was downright hellacious. Quelling the effects of this liquid seed of Satan was near-impossible, considering our insatiable desire to ingest more, but that was before our angel and trooper of a bartender-cum-hostess said she'd serve us dinner at the bar. "Well, bring us the mussels in chorizo broth ($10.99)!" came our immediate command, and a short while later, we found ourselves luxuriating in this bowl of bivalves. The meaty broth tinged with a seafood essence was the undeniable highlight of our meal.

Chef Norberto Herrera, a Peruvian, clearly has a notion to up the Tex-Mex ante by serving dishes slightly outside the norm. I'm not talking Rick Bayless caliber here, but when was the last time you had a mole poblano with duck confit ($12.99) in this town? It didn't exactly blow us away – the duck was a bit dry – but we appreciated the effort. Juicy duck al pastor tacos ($4.99) with grilled pineapple and duck chicharrones fared a whole lot better, but cheesy alambre tacos ($4.99) with grilled skirt steak and bacon were our favorite. Mahi-mahi tacos ($4.99) came out a smidge bland, though a little bit of that devil's dressing fired it up quite nicely. Since there appeared to be a theme developing in our meal, an order of chile rellenos ($10.99) seemed apropos. The enormous serving of roasted poblanos – battered, fried and stuffed with chicken tinga and Oaxaca and Chihuahua cheeses, then slathered in ranchera sauce and queso fresco – proved too filling to finish. Portions, by the by, are generous here, to say the least. Oh, and if you're the type who always orders guacamole ($8.29) at Mexican restaurants, breathe easy in the knowledge that peas are absent from the version served here. Sorry, Melissa Clark.

For dessert, we made quick work of the house-made coconut tres leches ($6.99) topped with a scoop of pineapple-agave sorbet. Churros ($5.99) may have resembled pretzels more than doughnuts, but after dunks in the arbol-chocolate ganache and salted dulce de leche, they too were downed with vigor.

Our bartender-hostess had left midway through our meal, and it was her replacement who strongly suggested we order the aforementioned sweets. We're glad we acquiesced. Besides, at a place called "El Patron," we half-expected to be bossed around.