Traveling the Illuminated Paths catalog is like listening to broadcasts from another world. Fittingly headquartered in a famous porthole to the beyond, Florida’s Space Coast, the DIY music label has over the past few years established an entire left-field microcosm out on modern music's frontier. Even from the fringe, the exotic label has attracted some press from high-profile media like the Fader, Tiny Mix Tapes and Resident Advisor on the wings of hand-crafted cassettes, personal bibelots and vaporwave.

Although founded as a digital-only imprint by experimental electronic artist Wes Ables (of Public Spreads the News), Illuminated Paths became the three-dimensional wonderland it is today once Central Florida video artist Joshua Rogers took the helm in 2013. Under him, the label has become underground-famous for not just otherworldly sounds, but also curious collector packaging that, in addition to physical cassette products, includes personal effects from his own cultural stash.

“I got nothing but time in my life,” says Rogers. “I mean, I’m up almost 24 hours a day, seven days a week. This is what I do, I live and breathe music. I’m always promoting the company. I think I fall sleep at four in the morning and get up at six or seven in the morning. My lady can attest to that.”

Rogers, a video and film specialist, grew up on the Space Coast, even doing videography at NASA for a time. But his footprint is deepest in Orlando, where the 36-year-old Full Sail graduate has done professional work under his production company Broken Machine Films for noted groups like Fly South Music and Fighting Records. And artistically, he’s been doing music-based video work at local shows for years.

Orlando was Rogers’ gateway into the underground scene. Coming from a beach town music culture defined by cover bands, he ventured inland as soon as he got a driver’s license in search of the punk and noise music he’d only heard about, beginning at 15 when he borrowed the family car to see D Generation and Skurvy the Clown at the now-defunct Fairbanks Inn.

“That had more feeling to it than anything they were playing on the radio,” Rogers says about those abrasive lo-fi sounds. “And I was willing to take the chance of coming out here, a 45-minute drive, just to experience that good stuff. And ever since then, I was hooked.”

For Rogers, sonic extremity is a lifelong pursuit, but one he came to by way of pure intuition, not academics. As a child, he was most entranced by his parents’ damaged vinyl, unaware that the records were casualties of sun and water. But his perception is hard-wired even further afield than that. Besides frequently listening with his ear pressed against the speaker for a blown-out sound, the young Rogers didn’t realize the difference between 33 and 45 RPM, often listening at the wrong speed. Regardless, it absorbed him, and today it informs his very modus operandi. “I was always, I guess, into that,” he says.

Because of all this, Illuminated Paths specializes in a particular sound. “You take a cassette tape and you leave it on the beach for, like, 20 years and then you come back and pick it up, dust it off and put it back in a cassette player – I like that sound, it’s just warped,” Rogers says. So in addition to an emphasis on contorted source material via vaporwave and other such experimental electronic music forms, the label pursues an additional one-of-a-kind layer of delivery: used cassettes.

“The used cassettes lend the sound that I’m looking for,” he says. “They tend to be more wonked out. They tend to lose the iron oxide on them more quickly than the Columbia ones or the Epic Records ones. So therefore when I re-record over top of them, it gives them that sound.”

All releases purchased on cassette also come with a digital download, or are available even cheaper as just a download. But if you’re game to follow him down the rabbit hole, Rogers is going for something more here. The full experience isn’t just a sound, it’s a feel, literally. Order a physical product from Illuminated Paths and what you’ll receive is less basic merchandise than full-blown care package from a kind and mysterious friend.

First, of course, is the actual product. “Every cassette that I make is handmade,” says Rogers. “I cut them out myself, put them all together.”

But besides that, he says, “Each one comes with individual ephemera.” These curios – which can include handwritten notes, postcards, trading cards, lottery tickets, flyers, a fresh air sickness bag – fill every shipment sent out. 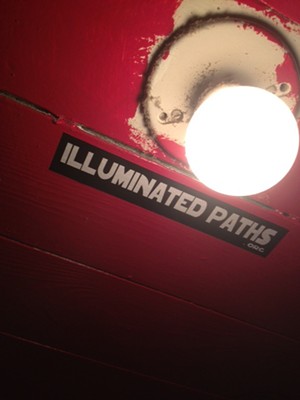 “From the years of me going to all those shows and things like that, I’ve collected piles of flyers, pogs, cards, stickers,” Rogers says. “I just have boxes of this stuff. I’m a collector so I keep one of everything, but then I’ll take, if I have two or three, I’ll put it in this box. And that’s accumulated since I was 15 or 16, so I got two or three boxes. But I go in there, for every time somebody shows an interest in our label enough to pay six dollars, eight dollars for a cassette, I feel like they deserve a little something extra. So I want to give them maybe a little piece of me, but also something to remember.”

It’s a tactile, relatively personal relationship that treats people more like pen pals than customers. “I put probably a little too much in there of myself,” he admits. “I even put report cards in there sometimes.”

DIY is one thing, and Illuminated Paths is entirely that. But very few music labels are, in themselves, as expressive and giving as Rogers’ outfit. That touch, along with the strange sounds he releases, makes it a realm like no other.

“Obviously I’m not going to build an empire on six-dollar cassettes,” he says. “I do it because I enjoy it and it tickles me that people are even interested in this.” Niche though it is, that interest is international. Besides North America, the label receives orders from the United Kingdom, Germany, Russia, Latvia, Australia and Japan.

Now, Rogers is taking Illuminated Paths on its first label showcase tour, a two-week run up the East Coast to Brooklyn that begins and ends with two different Orlando dates. Besides fixed headliners Heliophonic and Public Spreads the News, each date will feature a revolving cast of pickup artists that will mix Illuminated Paths acts with others like Power Pill Fist (formerly of Black Moth Super Rainbow).

When asked if Illuminated Paths is aimed at the future, the past or somewhere else altogether, Rogers, forever on his own frequency, replies, “I don’t really know where I’m going with this, but I just have this overwhelming urge to continue doing whatever it is.”

Citing Donnie Darko, he says, “It’s like that liquid spear that goes through everybody. It’s like you’re on this path and you don’t know why, you don’t know where it’s going. But do you really want to know? To me, it’s the drive of getting somewhere. I love climbing that mountain.”