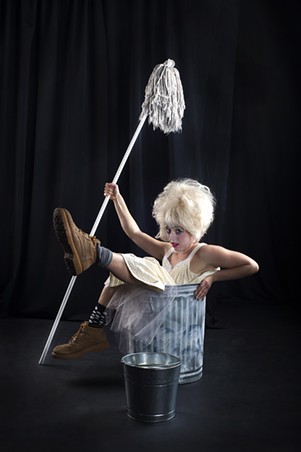 Photo by ShootThatKlown.com via WindyWynazz.com
Windy Wynazz in "UnCouth" at the 2015 Orlando Fringe
"UnCouth" begins with Californian physical comedienne Windy Wynazz slowly pushing a mop onstage with a white fright wig on her head, looking like an apathetic albino version of Carol Burnett's charwoman. Ordinarily, at this point I'd start by summarize the plot, but since I honestly have no clue what this show was about, I'll simply list some bizarro bullet points.
Over the course of 50 minutes, Wynazz:
I generally enjoy avant-garde clowning, and I hate to sound dismissive of anyone's art. I can't fault Wynazz's commitment as a performer, but I just didn’t find her character emotionally compelling or even particularly funny. There seems to be a message about the corrosive effects of fame, but it beats me exactly what that message is. The great thing about Fringe is that there’s a show for everyone; I’m just not the somebody that this show is for.