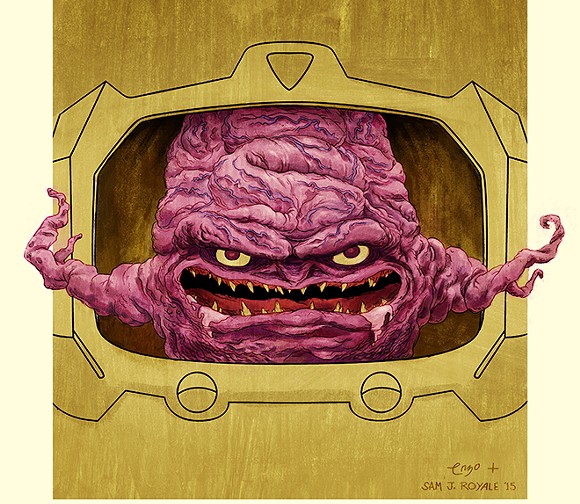 Sam J. Royale and Enzo Garza
If you’re a child of the ’90s, you likely spent your weekday afternoons after school watching Teenage Mutant Ninja Turtles on the floor of your parents’ living room. Though Mike, Don, Leo and Raph’s most famous enemy has always been Shredder – the nemesis of their mentor, Splinter – the brains behind the baddies was Krang, a living brain from Dimension X who used his genius to design high-tech weaponry aimed at making large batches of turtle soup out of the reptilian ninjas. The bizarreness of Krang’s concept has kept the character out of any of the filmed adaptations, but he’s finally getting his due at Acme Comics this weekend. An art show devoted to the oddly cute cerebellum is taking place there, inspired by an Argentinian art show called Krang LSD. Expect to see illustrations, paintings, sculptures, custom toys and even a life-sized model of Krang in his walker at this show. The organizers have had such an overwhelming response to the concept that Pat Fraley, the original voice of Krang from the ’90s TV show, recorded voiceover for a promo spot, which you can see below. Come hungry, because Daydream Pizza will be offering up their signature TMNT-inspired pepperoni and marshmallow pizza in the parking lot. It’s a no-brainer.