This Little Underground: The Bunny The Bear, I Arrhythmist, Kyle Colby at Backbooth


First and foremost, I am motivated by music. But if I wasn’t attracted to spectacle, I’d just sit at home and listen to records. Sometimes, that curiosity temporarily can suspend my insistence on quality, even if it is just for the sake of pure show. Which brings me this week to The Bunny The Bear because, well, just fucking look at these guys… 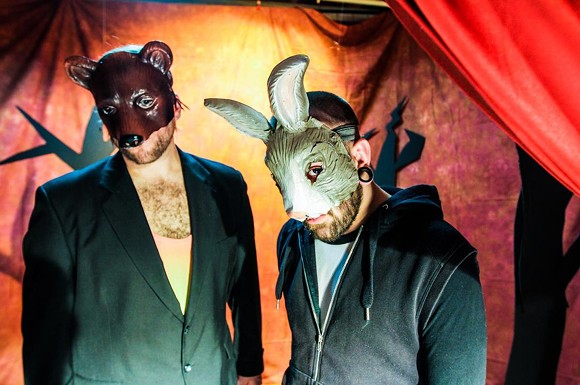 The Bunny The Bear
They wear animal masks – a bunny and a bear, duh – while sing-screaming their dysphoric adolescent hearts out with almost no detectable sense of art or humor. Unfortunately, the worst part about their recent show here (Feb. 24, Backbooth) – well, perhaps not the worst part – is that they didn’t even wear them. Instead, we got this…

Christopher Garcia
The Bunny The Bear at Backbooth
Yes, the Bunny the Bear unmasked, otherwise known as the answer to a question no one asked. Anybody ever called for ICP to perform without make-up? Exactly. So now all we’re left with on the scorecard is the music.

On that count, they’re a genre trainwreck of metalcore, pop and electronic that operates on the faith that they’ll pull it off not through taste or creativity but through sheer volume. It’s like these guys looked at the Linkin Park model and thought that the only thing wrong with that dynamic is that it’s too nuanced, or doesn’t have enough dance elements or… do I really need to go on here? Now, the bear (a role filled by a rotating cast) is a woman (Haley Roback), which adds a little Evanescence whiff to the cheese party. There are some passable individual aspects here. But all together in this blender, it’s a special kind of abomination.

Of the two openers I caught, Titusville’s I Arrhythmist, though possessed of a little more genre focus, were equally indiscriminate in other ways. These young tech-metal hopefuls came armed up to here with guitars and bass with way too many strings to matter right now. The result, unsurprisingly, was a wanky clutter. But the destruction of a kid mannequin was involved, so there’s that.

Way on the other end of the spectrum was Minnesota opener Kyle Colby, who strummed and wailed out acoustic emo-pop so gooey that even Chris Carrabba might consider the kid for an atomic wedgie. He was likely included on the bill only because he plays bass in the headlining band, but poor little guy – so sensitive, so pained, so hackneyed. It ain’t easy carrying that sad little hat trick. All right, enough already. Too easy. Even I’m starting to feel bad now.