COUNCIL WATCH!: Watching city government spend your money so you don't have to 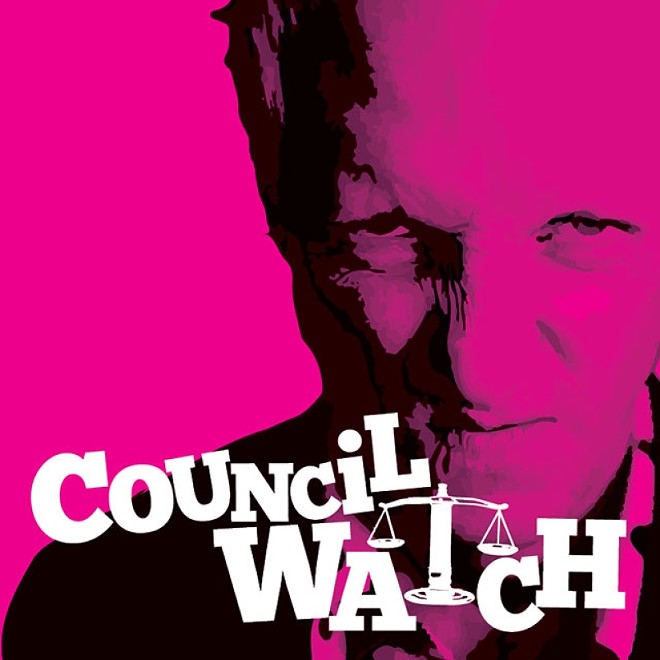 Greetings and salutations, dear readers. It's time for another dive into the municipal money pool via your friends riding the beige dais until it can't be rode no more. Things we'll be paying attention to this week – besides the amazing hair of Regina Hill – include A 23RD AMENDMENT TO THE DPAC CONSTRUCTION AGREEMENT, because 23 is the new lucky number, at least if you need $9.5 million in contingency cash to make your premise (fancy life! Arts support!) look legit. Also, there's another six acres coming out of Parramore apparently to assist the chicken fans (and their sometimes awful fans) at Orlando City Soccer with their new stadium. Get your carving knives ready. We go live at 2 p.m.!!!!

2:07 p.m.: NEW INTRO MUSIC EQUALS NEW YEAR!!!!!! Buddy Dyer is impressed. Also, like the fact that the invocation-leading minister is A GATOR!!!


2:10 p.m.: Jesus wants us to have honor, pleasure and order, says this guy. HONOR, PLEASURE AND ORDER. Also, the pronunciation of "dealing" shouldn't sound like "diddling," methinks.

2:13 p.m.: IT'S NATIONAL STALKING AWARENESS MONTH. There is an OPD guy who looks uncomfortable talking about it. HE HAS A STALKING FACT SHEET. STALKING TALKING POINTS. Not making fun of stalking, but, uh, there are some terrible things going on in this community right now involving women being maimed. These flag wavings don't do that much, probably, especially on public access TV when there is nobody in the audience. I MEAN THERE IS NOBODY IN THE AUDIENCE (except for maybe 10 people).

2:18 p.m.: MAYOR'S UPDATE!!!! Buddy says that MLK weekend was the best he's seen, maybe because SELMA was out and he saw it. NOW HE JUST POINTED OUT REGINA HILL AND SAM INGS BECAUSE THEY ARE... possibly not allowed to vote based on color.

2:19 p.m.: ICONIC ORLANDO SIGN LIGHTING ("RETRO," SAYS BUDDY) AT CITRUS BOWL. 100 retrofitting lights that will come in all different colors. They can be purple for domestic violence OR THE SOLAR BEARS. THAT'S A STRANGE EQUIVOCATION.

2:22 p.m.: Here comes the consent agenda and ALL the talking. We start with Tony Ortiz WHO HAS SHAVED HIS BEARD. The mustache remains. He is issuing condolences and is sad; I have been given condolences from the dais before, so I can't even smirk. However, Tony Ortiz is having issues with that stache.

2:29 p.m.: Patty Sheehan owns the Parramore development and the HUD sustainability grant. She chairs the board. "A blueprint for revitalizing Parramore," because we've never heard that term before.

2:30 p.m.: Regina Hill is back to regular hair, sigh. Well, regular in terms of hair that looks like my own. She's having a pretty strong talk about folks touring Parramore and being, uh, amazed. However, we are also saying that the mystical Creative Village is going to give jobs to Parramore residents.

2:35 p.m.: Wait, is Sam Ings talking about wastewater and opportunity? IT'S THE CIRCLE OF LIFE. At any rate, good for him for talking about opportunities for former inmates.

2:37 p.m.: Fun Spot and Gatorland are now dating. SERIOUSLY. In other news, ribbed for his pleasure.

2:38 p.m.: "You tried to put a gator on me," says Ings to Dyer. "I thought this was just a Florida Gator thing." Dean Martin wants his script back.

2:40 p.m.: Jim Gray likes spending money a lot for a Republican, especially when GOAA is involved.

2:41 p.m.: NEW BUSINESS!!!!! Orange County was going to put $25 mill into DPAC's phase two, but it was supposed to expire in January. Everyone buckled. Things have been "extended." DPAC gets its way again. WHAT COULD POSSIBLY GO WRONG? Oh, wait. Everyone meaningful at the top quitting could go wrong, and has.

2:43 p.m.: Some ordinances are being pushed through with no apparent blowback. BRING ME A STRIPMALL.

2:46 p.m.: Lawanna Gelzer is here to annoy everybody on the dais because of the soccer stadium issue. She has asked for an impact study on the behalf of Parramore, but it has not come her way yet.

2:48 p.m.: HRNK!!!! DAVID AND GOLIATH REFERENCE! ABOUT THE CHURCH NOT WANTING TO SELL THEIR LAND FOR THE MLS STADIUM! SO NOW THE CITY IS GOING TO CLOSE PARRAMORE STREETS DOWN TO BUILD THE STADIUM. JUST SO HAPPENS THAT THE CHURCH COULD BE AFFECTED BY NOT HAVING STREETS.

2:51 p.m.: "Today you're proposing to shut down this street between Church and Central and Pine St. behind the church... that's not good business," Gelzer says.

2:53 p.m.: GELZER IS TALKING ABOUT THE SOCCER STADIUM AGAIN. This time it's about rezoning Parramore into a concession booth, basically. "Why now?" she says. You had all this time to do this. You spent half a million dollars to study this. "Get it right this time. The community is watching... DON'T WASTE OUR TAX DOLLARS ANYMORE."
"OK, that was quick," Dyer says. Nobody cares about Lawanna Gelzer, perhaps unfairly.

2:59 p.m.: "God, man? You just raised my taxes! ... Have we misled the people who have given us the funding? Or were your intentions all along to gentrify and get rid of the Parramore community?" Gelzer says. "Gentrification. I don't need anyone to tell me who am or what I need to do... Can you start questioning your mayor on some of these things before you rubber-stamp them?"

3:03 p.m.: ANOTHER SPEAKER. ANOTHER SPEAKER THE DAIS DOESN'T LIKE. "Scam on your municipal bonds," she says, referencing the new OPD station and soccer stadium. The city and its taxpayers are going to suffer if bonds default.

3:10 p.m.: Quasi-Judicial Hearing that is being explained as "not a big deal," because this variance is trouble? Sheehan says that she says that the home that is in question is not up to code, because the garage apartment doesn't meet setback rules. There is no 25-foot setback, and the mother-in-law suites are getting fatter than your mother-in-law.

3:18 p.m.: Still talking about "infill" and land management. "It may be social norms have changed a little bit," says Buddy Dyer. Starter houses for everyone!? Planning department is saying that people want to stay in their neighborhoods. NIMBY FOR EVERYONE.

3:22 p.m.: "California dreaming over here," says Regina Hill. Sheehan acknowledges that the rich people concerns of downtown are "esoteric." AND WE ALL GET A DRINK.