Outstanding in the Field flips the script, brings the table to the farm 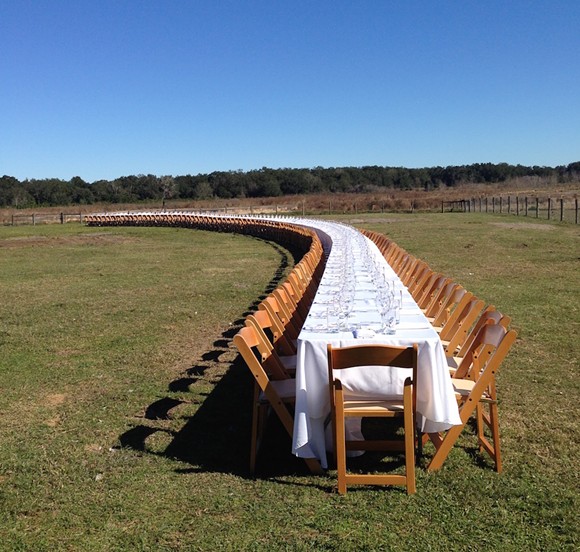 The OITF table at Lake Meadow Naturals, Ocoee, in 2014
Outstanding in the Field is well-named on two levels: It's a dinner that takes place alfresco, out in the wide-open space of a working farm, but it's  also, utterly without question, outstanding. At $215 a head, it isn't a cheap ticket, but it's an experience you will remember for years to come – and if you can swing it, it can become a cherished yearly tradition. (Trust me: It's worth a dedicated piggy bank.) 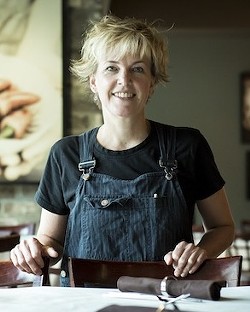 Kathleen Blake (photo by Rob Bartlett)
The usual shape of the day: Guests arrive at the farm at 4 p.m., bearing their own plates; the mismatched plates liven up the table, add a personal note, and are returned to their owners at the end of the night. Cocktails, wines and craft beers are offered, along with a selection of hors d'oeuvres, and mingling commences. Tours of the farm are led in the (hopefully) sunny late afternoon, then guests find their way to the long-stretching white table, where course after course is served, along with wine and beer pairings, family-style, as the light goes from magic hour to sunset to candlelit dark. Friendships are forged in the elbow-to-elbow process of passing platters and comparing flavors, not to mention those trips to the loo by flashlight (a partner comes in handy. Tip: Don't wear heels). 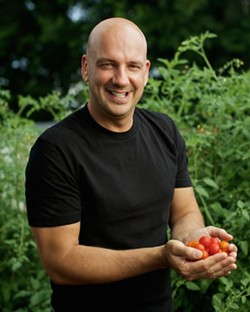 Kevin Fonzo (photo by Rob Bartlett)
The OITF team often refers to their traveling culinary roadshow as a "restaurant without walls," as they recruit some of the most talented chefs in each city to which they travel. In past years, Primo's Melissa Kelly (of Maine, though she has an outpost here in Orlando as well, and hey, there's no state-of-Mainer who won't jump at the chance to come to Florida in January) has handled chef duties.

This year, however, Orlando is treated to not just one but two nights at the long table, cheffed by K Restaurant's Kevin Fonzo Saturday, Jan. 17, and by the Rusty Spoon's Kathleen Blake Sunday, Jan. 18. (We love these two, not least for their lively participation in last year's Bite Night.) Fonzo's Saturday table is already sold out, but there are still a few seats to be had at Blake's Sunday dinner.

Guests' plates and a few of the residents of Lake Meadow Naturals, OITF 2013
© 2022 Orlando Weekly