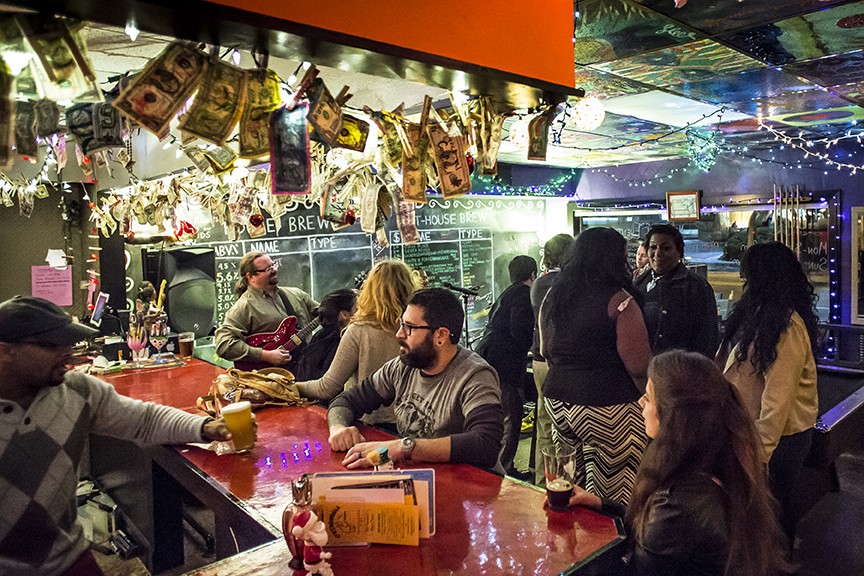 It's a brew pub located on Disney property. When you're done waiting on long lines, crying kids and fireworks, retire to Big River Brewery for a Rocket Red Ale.

When you step into Cloak and Blaster, you'll forget you're in a Waterford Lakes strip mall: It feels like a cross between a Middle-earth tavern and the Great Hall at Hogwarts. A creative menu of beer-based "cocktails" (the "Wolf Bite" is the prettiest and tastiest), tons of table space for gaming and a decent selection of beer and cider mean you've found your geeky home.

This is a roadhouse that happens to serve great food and drink. This pub features 16 beers on tap and a menu full of hangover preventers (or cures).

When this little corner bar/gallery opened in 2011, it threw all the rules about how to "do" bar nights out the window – anything goes at the Falcon, from PBR-inspired art shows to parties celebrating the release of the Taco Bell Doritos Locos taco to dark-wave music nights where Joy Division, not Deadmau5, is on heavy rotation.

The perfect craft beer bar for people who like regular bars but want above-average beer. It's stocked with games, billiards, shuffleboard and more, and there's tons of beer to choose from – more than 330 craft beers, plus wine, sake and food. Frank & Steins also recently opened a new Winter Park location on Fairbanks Avenue where the old Shipyard Pub used to be.

With one of the best patios in town and a tradition of offering free shots every time the train goes by, the Lamb offers a killer combo of comfort and festivity. Tons of seating, heaters for when it's cold, a gorgeous lake view and a full bar mean you may never go inside, but when you do, guess what: same level of comfort, same full bar, plus a ping-pong table. Nothing "baa"d about it. (Sorry.)

Hourglass Brewing has been packing their tiny taproom thanks to a vigorous cycle of sours, stouts and other acts of brewing whimsy. New beers are added on Mondays, and on Tuesdays you can sample drafts for just 50 cents.

Hunter's Creek has a craft-beer bar it can call its own. House of Beer has 48 rotating taps, as well as a hefty 200-bottle selection. One of the best things about this place: The Drink Like a Local specials, during which all Florida drafts are $1 off.

This bar opened in the space that used to be the Winter Park Saloon (and, before that, McRaney's Tavern), and it promises to serve the finest in microbrews and boutique wines. Beers on offer are often posted to Facebook, and the live music, trivia nights and UCF Knights viewing parties also on tap here make for excellent drinking companions.

For affordable availability, it's hard to beat the Milk District. Multi-page menus of sub-$5 beers, nightly specials, live music and board games mean you can try several new beers for less than $10, enjoy great local talent and remember you're a badass at Connect Four.

The New York Times name-checked this little brewery, about 45 minutes from downtown Orlando, as one of the area's notable craft-beer spots. Unique beers are brewed on site and served alongside a full menu and live music in the Rocking Rabbit Tap Room.

People out in Lake Nona need their food and bev too, y'all. This biz has more than 50 beers on tap and another 50 in bottles (not to mention a wine and cocktail menu). This is where you'll find a lot of Disney castmembers taking in some much-deserved R&R as they gather to watch the game.

One of the city's better beer bars sits, unexpectedly, on a forgettable strip of Colonial Drive, with 40 beers on tap and more available by the bottle – but the meaty bar bites, inventive burgers especially, are what sets this place apart from the rest.

This organic brewery offers 24 taps, most of which serve their own fresh-brewed organic craft beer. Some wines and ciders also available, for those who – dare we say it? – don't like beer. Shadowboxes of Florida Brewing Festival medals aplenty hang by the front door.

Our gaming friends all seem to agree – Player 1 is the best place in town that combines drinking and gaming. In addition to coin-op arcade and pinball machines, the bar features gaming systems from every era – X-Boxes and Nintendo 64s and Ataris and Sega Genesis and just about anything else you can think of. In addition, it serves a pretty kickass collection of craft brews, as well as wines, ciders and energy drinks for the designated drivers.

If craft beer is an art, Tap & Grind is the graffiti artist that tags it and makes it better. Their rotating selection of beers filtered through extra ingredients like vanilla beans and berries is great, but actually talking about beer styles to a knowledgeable (and not snobby) staff member is a sure-fire way to consume multiple rounds without noticing.

Taps in Winter Park Village features 25 rotating craft beers on tap, more than 300 bottles, plus a wine list and cocktails.

This Ivanhoe Village hangout is actually a converted garage, door and all. Two buddies joined forces and have painstakingly renovated what was once a concrete box into a warm and inviting oasis along the Alden warehouse row. It's a hit with the welders, artists and craftspeople in that neighborhood, before or after happy hour.

Sanford is now home to its own brewery, which has a tasting room and dog-friendly beer garden open Thursdays, Fridays and Saturdays.

This Tampa-based craft-beer chain has multiple franchise locations in the Orlando area, and they all have one very important thing in common: They are temples to craft beer. Tons of changing drafts, walls of coolers full of enough bottled beer to drown an elephant and a laid-back, friendly environment in which to consume it.

In addition to the full-on World of Beer experience – plenty of craft beer on tap and in bottles, a menu of snacks, sandwiches and tavern fare, and a friendly serving staff – this location also boasts an expansive and comfortable patio with an outstanding view of Lake Eola. People-watch while sipping beer and gazing at the fountain – your afternoon is made.

Everyone loves this converted country store with its bit of upscale hippy vibe. It simultaneously calms and inspires you once you shuffle in the front doors. Most people head here to sample the food menu, but the beer selection is fairly brag-worthy too. If you haven't been before, try to time your visit with a live show on the Pinterest-worthy patio.