By Colin Wolf and Monivette Cordeiro 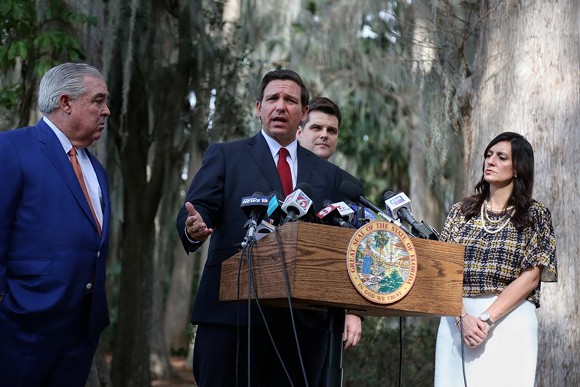 "I want people to have their suffering relieved," said DeSantis, speaking in front of reporters at Azalea Park. DeSantis stated that if the Legislature fails to change the law, he'll drop the state’s appeal of a 2017 court decision that says banning it violates a constitutional amendment.

The appeal, which was put in place by former Gov. Rick Scott, created a ban on smoking medical marijuana and also capped the number of medical-marijuana licenses and the number of dispensaries in the state of Florida.

DeSantis also made it clear that he's against recreational marijuana, but added that he would also look at all cases involving medical marijuana.


Today, I am filing a motion with the First District Court of Appeals requesting a stay of opinion on the People United for Medical Marijuana v. Department of Health case. I look forward to working with the legislature to address the question of smoking medical marijuana.


Democrat and Florida Agriculture Commissioner Nikki Fried, who campaigned on a medical marijuana-friendly platform and recently announced that she would hire a "Director of Cannabis" commented on today's announcement.

"When the people overwhelmingly voted for legalized medical marijuana in 2016, they intended for the medicine to be accessible by patients in the manner which their doctor, not Tallahassee politicians, decides is best for their treatment, " said Fried in a statment.  "The State needs to increase the number of licensed medical marijuana growers to create a more open market, greater competition, more affordable prices, and a greater level of access to medicine for Florida’s patients. My number one priority on this is Florida’s patients – we have an obligation to act in their best interest and expand access to medical marijuana, so that sick and suffering Floridians can get the medicine they need. I will continue to be their champion and push to implement the true will of the voters."

Attorney John Morgan was also pleased with today's news. The self-described "pot daddy" of Florida, who essentially bankrolled Amendment 2, said the people of Florida should be happy. "The governor's right, if 72 percent were in favor then, it must be 82 percent by now and it gets bigger and bigger every single day," said Morgan in reference to the overwhelming support of the amendment in 2016.

You can watch the full press conference below.

This is a developing story, and we'll be updating it shortly.
Stay on top of Orlando news and views. Sign up for our weekly Headlines newsletter.
© 2022 Orlando Weekly