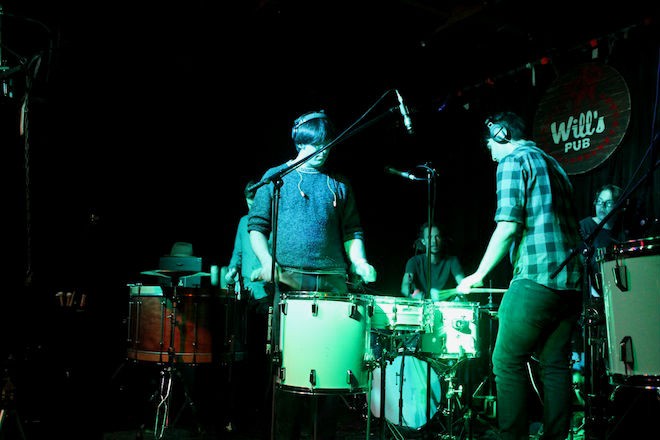 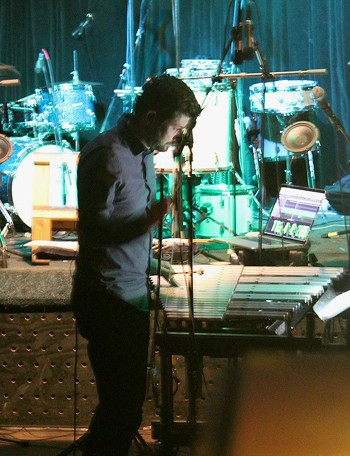 Ashley Belanger
Thad Anderson
Be it strings, horns or guitars, seven players of most instruments is imaginable. But seven drummers – let alone ones who don’t play together full-time – has all the potentiality of a highway pileup. So credit to Kid Millions and the hometown corps for not being a loud popcorn bag live. Instead, this centipede of hands and sticks began like orchestrated rain. Then, when they shifted en masse suddenly to the low end, the mounting effect was like an advancing tornado. From there, it only opened wider with a tribal drone that conjured sweeps over untamed landscapes. Each composition of the set was an odyssey of endurance drumming and, once he got back on his native footing behind a full kit for the finale, Kid Millions proved himself a tireless beast of a locomotive, pounding with all limbs for almost a half-hour straight. Maybe Man Forever is no SSLOTS, but this performance was an effective and moving rhythm quest.


Before the big spectacle, some locals performed pieces that were more intimate on their own imported sound array, which – paired with their extraordinary instruments – was on an entirely different sonic cloud. Thad Anderson hit otherworldly planes by taking both mallet and bow to the bells. One of the night’s highlights was Matt Roberts and Kaylee Bonatakis performing Tristan Perich’s “Observations,” a chimingly rhythmic composition that pairs percussion with 1-bit electronics. It’s a symphonic collision of clang and blip that yields an unexpected and stunning fusion that rings like a beautiful alarm.

As the guy up in there knocking back the Bud Heavies, I always feel like a bit of a fanny-pack tourist in these academic circles. But I consider it a blessing to be living in a place where there are things going on that can make me feel strange. By reliably presenting music that can – more than most – be considered truly modern, the Accidental Music Festival continues to prove its place as one of the flagships for the city’s non-rock contemporary music scene.