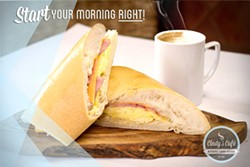 Last night foodie megasite Eater released a list of their 53 most anticipated restaurant openings for Fall 2014. A few are in Miami — el Bulli alumna Najat Kaanache's Piripi, Miami powerhouse Michelle Bernstein's latest spot, Seagrape, and Iron Chef Masaharu Morimoto's new Morimoto South Beach should all be open in time for your December Art Basel Miami Beach road trip – and one (Farmtable Kitchen) is in St. Pete, but sadly, none are in the Orlando area.

Which doesn't mean there's nothing new here! Orlando is building and staffing new restaurants almost faster than we can keep up with them. They may not be quite as fancy as an omakase at Morimoto, but we think you'll enjoy all 10 of these new Orlando restaurants:

2) Mamak Asian Street Food, a restaurant specializing in Malaysian market fare, will open soon in the former Ha Long Bistro space on Colonial Drive in Mills 50. For now it's still under construction, but it's a pretty direct contender against Hawkers Asian Street Fare, just around the corner and up Mills a bit. Hmm.

3) Look for a second Shake Shack to open in the I-Drive 360 complex. Maybe this will draw off a bit of traffic from the Winter Park location? We sure hope so, because we're dying for another Shack-sauce-slathered cheeseburger and a Key lime pie frozen custard.

4) Spice Burgr will take over the space occupied by the short-lived Meltz in downtown’s Chase Plaza. We're still not sure how a whole restaurant devoted to grilled cheese didn't work out, but Spice Burgr promises "flippin' great burgers" and "some of the best dawgs in Orlando" on their already-active Twitter feed, where they posted this sneak peek of the interior:

5) The former Perkins building on East Highway 50 in Clermont is getting a major makeover, thanks to the soon-to-open Zab Thai. Stay tuned to their Facebook and Twitter for updates; the menu on the website is still lorem ipsum.

6) On Sept. 15, Cooper’s Hawk Winery No. 2 comes to the I-Shops on I-Drive. We didn't love the Waterford Lakes location but a flock of loyal commenters sure did, so this high-end wine-country-inspired restaurant should do just fine.

7) For the beer lovers: Wop’s Hops Brewing Company opens in Sanford at the end of September.

9) Not new, exactly, but in a brand-new spot: Cindy’s Café, formerly Cindy’s Tropical Café on Virginia Drive, has opened at 2512 N. Orange Ave. in the Health Village. They've got some of the best Cuban sandwiches in town, and their meal deals are the way to go if you're on a budget. (Hope they'll still offer them!)

10) Last but not least: Downtown could get a little louder if London-based Ace Café opens on Garland Avenue between Livingston and Robinson streets. Plans for the motorcycle-themed complex – housed in the former Orlando Weekly building! – call for a two-story restaurant and bar, an outdoor bar area, a motorcycle dealership and a courtyard concert space.

An artist's rendering of the Ace Café complex (via AceCafeUSA.com)

As always, to keep up with the latest Orlando food news read Tip Jar.