Has this week felt like a long one? Well, do a happy jig, because it's almost over. We've got some links right here that should help you kill at least some of the time until you get to say sayonara to your co-workers.
click to enlarge 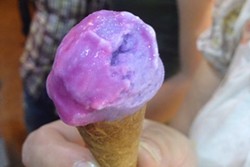 1. Just when you thought it wasn't possible to make ice cream any cooler, a physicist has to go and prove you wrong. Manuel Linares has taken ice cream to the next level by making it change colors when you lick it. The chilly sweet stuff is called Xamaleón, tastes like tutti frutti (ooh, we hope it's sour!) and changes from periwinkle blue to pink when it comes in contact with your tongue. It's almost hypercolor ice cream!

2. You know what sucks about living in Florida? The heat. Even worse? The oven your car turns into when it sits for any length of time. Kulcar is a solar-powered device that continuously replaces the stale, steamy air in your car with fresh air from outside, claiming to reduce  in-car temps by up to 68°F. Bonus: the solar panel hanging out of your window makes it look like your car has wings!

3. It's almost like literal torture that we have to wait until NEXT YEAR for the second half of the final season of Mad Men to air. We keep scrolling through this gallery of the best moments from Season 6 to tide us over. Oh, tap dancing Ken Cosgrove!

4. Dominique Ansel is well-known in the food world for creating some pretty awesome concoctions. I mean, he invented the cronut and started a foodie revolution. Well, his latest creation is a peanut butter pretzel lobster tail. Served with a honey brown butter dip, these would make a fantastic afternoon snack. And if that's not cool enough, last weekend, he was selling canned sundaes in the Hamptons last weekend. They're freaking adorable, look: 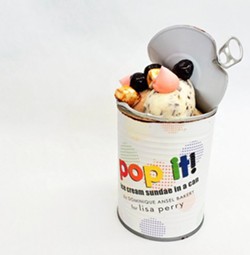 5. This one's a little bit slow to start, but you'll be amazed when you see how much these cows enjoy a trombone version of Lorde's Royals.