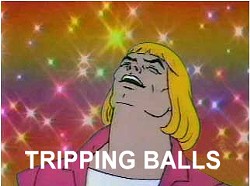 The Orlando Fringe Festival is trippy even when you're sober, but after you've been hitting the beer tents and full-liquor bar (holler at Stonewall) all day in between shows, things start to get even weirder. But don't fret, there are a number of things you can see that are even better in that funky-fugue state. 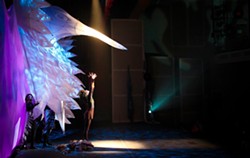 Heather Henson's Ibex Puppetry  (yes, that Henson) has been touring the world with this hippy-dippy earth-hugging kite show, and it shows -- this crew knows how to fly a fucking kite. Sit back and let the native chanting wash over your tired, sun-kissed body as you watch the journey of Awaken, a crane, from egg to adulthood, told through kites and puppets. The brownie I'd eaten the night before reared its head again and I was transported along with our long-legged bird friend in his quest to find his parents and the crane promised land (Florida). A little hit of your friend's peace pipe would only make this gorgeous performance that much more interesting. The Girl Who Fell up a Chimney Local artist and champion
click to enlarge 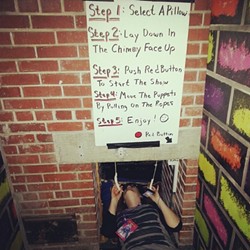 at life Jeff Ferree is back in the smallest venue at Fringe (the broom closet) and he has worked his usual magic. Grab a pillow, lay back and stick your head in the old chimney to watch the story unfold. It's very Alice in Wonderland-y; you'll feel like you're tripping balls as you watch the upside-down drippy ice-cream-cone people wax poetic about life in the chimney and other weird things that totally went over our heads. Have a buddy wait for you outside in case you pass out in the pillowy embrace of Ferree's latest masterpiece.     Professor Soap's Music Machine If you took two members of the Blue Man Group and had them perform in front of a screen playing Adventure Time With Finn and Jake, you might get an inkling of what this show is about. Two guys jam out on a drum and keyboard to a geeky-clubby mix reminiscent of a Yo Gabba Gabba acid trip while you watch three short animated clips. Black lights and lava lamps adorn the theater, and the audience is given glow sticks and plastic maracas to shake at the gods for the 15-minute set.