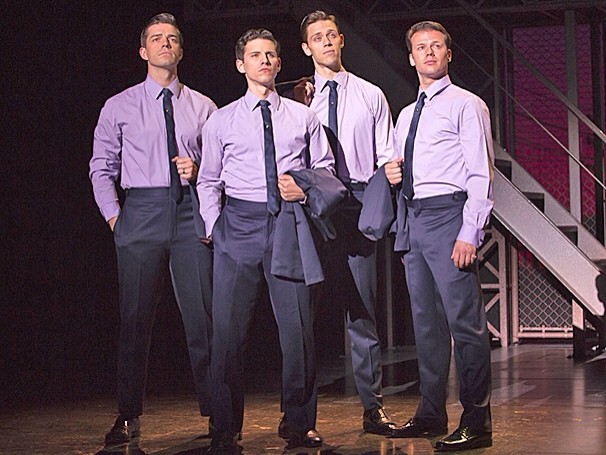 The following review contains excerpts from my upcoming Live Active Cultures column in the 4/23/2014 issue of Orlando Weekly, and my 5/14/2009 review of a prior production.

The newly-released trailer for director Clint Eastwood's cinematic take on Jersey Boys looks solid, but it's hard to imagine any film having the dramatic theatrical impact of Des McAnuff's 2006 Tony-winning musical, whose tour is back at Bob Carr through this weekend for another welcome bow. This road company of the multi-award-winning 2005 Broadway musical travels with all the elements that have made Jersey Boys a worldwide hit fully intact. First, the songs: Even if you don’t think you know the music of Frankie Valli and the Four Seasons (or songwriters Bob Gaudio and Bob Crewe) you do. “Sherry,” “Big Girls Don’t Cry,” “Rag Doll” and “Walk Like a Man” are practically in our musical genetic memory; hearing them performed, as they are here, with passion and note-perfect precision provokes nearly Jungian joy.

Second, the story: a rock & roll Rashomon recounting how four fellas from Joisey made it from the street corner to the top of the music biz, only to stand in the shadow of the Beatles and see their friendships crumble under financial strain. The earthy and efficient book (by Marshall Brickman and Rick Elice) gives each group member a “season” to tell his side of the story.

Tommy DeVito, a two-bit crook from Belleville with big ambitions, exits the revolving door at Rahway State Prison and assembles the group from neighborhood friends. DeVito hustles through the ’50s for their first successes, and then runs afoul of friends with vowel-ending last names who funded the foursome in exchange for a four-figure vig.

DeVito finds Bob Gaudio, a songwriting wunderkind (he wrote the hit “Who Wears Short Shorts” at 15 and dropped out of high school to tour) whose work with flamboyant producer Bob Crewe brought the Four Seasons to the top of the charts. Nick Massi, the deep-voiced bassist, is torn between his two loves – music and the bottle – and constantly muses about starting his own band. At the center is Valli, whose angelic voice made their music indelible; his dueling relationships with “big brother” DeVito and “little brother” Gaudio drive the wedge that ultimately splinters them.

The play isn't perfect -- the French hip-hop prologue has dated badly, and the act break is still awkward -- but it's as close as you'll find in this age of cash-grab jukebox musicals and movie remakes. In the current tour, Haden Milanes recreates Frankie's famous falsetto and fluid dance moves to a T, and Adam Zelasko nails Nick Massi's humorous pathos as the group's "Ringo." Nicholas Dromard lays on the "old neighborhood" schtick a little thick as Tommy DeVito, but the chatty Jersey ex-pats sitting next to me loudly approved of his pungent patois, and Quinn Vanantwerp's fresh-faced Bob Gaudio is guileless enough to be an extra in Book of Mormon.

If you remember the original tour, you may notice how some formerly-realistic moments have become slightly stylized, and once-sharp choreography is now slightly sloppy, as often happens in long-running shows. But McAnuff's seamlessly flowing staging, supported by Michael Clark's pop-art projections, remains among the best I've ever seen. While choreographer Sergio Trujillo confines the explicit dance steps to realistic contexts, McAnuff’s blocking makes every book scene a ballet, with the slightest background movement marked and measured.

It’s so slick that some sensitive emotional moments end up slightly stripped of spontaneity. But when the first act climaxes with a spectacularly simple illusion that places you onstage behind Boys, staring into a sea of stage lights and flashbulbs, all flaws are forgotten in a flood of theatrical wonder. This marvel of theatrical craftsmanship is not to be missed; when the tour leaves town, you’ll be “Beggin’” in vain for them to “Stay (Just a Little Bit Longer).”

Through April 27 at Bob Carr