"How do you feel about East?" 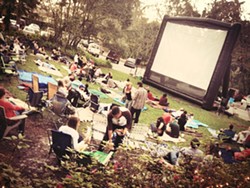 The Blair witch Project was one of those films that, by all means, shouldn't have made it. Not that I didn't want it to be the towering success that it was, but all odds were against it: Investors were having a hard time backing the film (nobody had seen a proper found footage film up to that point), and see indie horror market wasn't nearly as strong as it is today. It was a hail mary, but it was one worth taking.

Fast-forward 15 years later at a very different "Wednesday Night Pitcher Show" on the Enzian lawn. The sun was starting to set, blankets were being laid out and folks were ready for something special. See, the Enzian was one of the three places that the Blair Witch made her first appearance -- back when it was a 3 1/2 hour long film. At the time, nobody knew what to expect, but our local horror and film community were up to the task of creating and enhancing something revolutionary. That's why this night was so important: It was a homecoming. 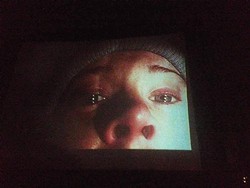 My girlfriend and I patted down our blanket right in the middle of swelling crowd. I wanted to feel the energy around me, the snarky giggles of Full Sail film students, the nostalgic whimpers of lifelong fans; I wanted it all. On top of all of this, it would be the first time my girlfriend had ever experienced the film, despite all of the countless found footage films I throw in her face on a regular basis. The mix of old and new blood on the lawn completely made the atmosphere and, at least for me, it's these moments that make the Enzian a diamond in the rough.

There was a brief forward from president Henry Maldonado (as he does), I shoved some chicken and fries into my face, and then the world went dark. The sky was still an ominous shade of navy blue, turning the trees' silhouettes  into jagged claws behind the hilariously monolithic blow-up screen. But we were still all there, deep in the forest with Heather, Josh and Michael ... it was unreal.

The movie itself is exactly how you remember it: the camera is still obnoxiously shaky, The "fishermen on the river" sequence still feels awkward and forced, and you still can't wait for Heather to just shut the fuck up by the end of it all. Love it or hate it though, The Blair Witch Project sparked a proper revolution. It was the first of its kind (not counting the ever-disturbing Cannibal Holocaust) and gave indie horror filmmakers permission to spread their wings a little. And it all started here, in our little town best known for drunk college students and Mickey Mouse. 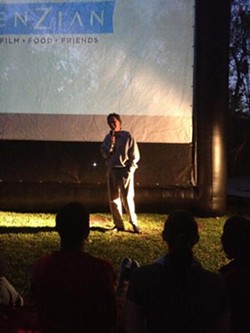 After the credits rolled, the film's producer Robin Cowie (appropriately lit by a single creepy stage light) gave the fans a very humble and honest Q&A, revealing the dream Blair Witch sequel that could have been: "We wanted it to be set in the snow in the 1970s, and actually tell the story of the origin of the Blair Witch," Cowie admitted. The remaining people on the lawn seem to respond positively to this, and then collectively bowed their heads in shame lamenting the terrible Blair Witch 2: Book Of Shadows that instead followed.

I had a chance after the Q&A to sit down with Robin to chat a bit about his thoughts on this success of the film, and how he feels seeing the small army of people that showed up to the screening: "I'm just grateful really. You always try to put out your best stuff, but your dream as a greater person is to try and make something that other people really like. And to see all these people out on the lawn is just really cool, man. I mean, just seeing the name up on the marquee

it's like 'holy shit!' I was talking to my wife about how this film has a whole life of it's own, a personality. It was a privilege, and I'm just grateful to have been involved. Back then, it was a cool time to be doing what we were doing. I actually just moved back to Orlando, so for me, somehow it's just amazing seeing it all come full-circle."

You can catch The Blair Witch Project on Netflix streaming right now.