Here’s the thing about Lou Pearlman: Love him or hate him, you have to give him credit. The man never stops scheming.

When U.S. District Judge G. Kendall Sharp handed Pearlman a 25-year sentence in May for conspiracy, money laundering and making false statements in a bankruptcy proceeding, Sharp also handed Pearlman “the keys to your jail cell.” For every $1 million Pearlman came up with in restitution to his victims, Sharp said in court, Pearlman’s sentence would be reduced by one month. He’s in for 300 months. He’s on the hook to the government for $200 million.

For most people, $1 million might as well be a moon rock. But most people are not Lou Pearlman. The audacity of his crimes is staggering: lying to banks to secure millions of dollars in loans, running a Ponzi scheme involving employee investment accounts in his Trans Continental Airlines companies, filing false tax returns to cover it all up, then fleeing to Indonesia and living under the name A. Incognito Johnson when it all collapsed.

The audacity of his plan to get out of prison before he turns 78 – he’s 53 now – is just as staggering. It involves a local fledgling Southern rock band, a reality show, and millions of viewers and listeners willing to go along with an admittedly unique premise.

“It’s like Charlie’s Angels meets Making the Band,” says Pearlman via telephone from the Orange County Jail, where he is awaiting transfer to federal prison.

It’s supposed to work like this: Biteboy is a local band fronted by 20-year-old guitarist and songwriter Rick Namey. The band’s name is a reference to Rick’s predilection to biting as a child, says stage dad extraordinaire Rick Namey Sr., 59, who sometimes refers to himself as “P Daddy.” Rick Sr. met Pearlman 20 years ago, back when Lou was trying to make his fortune in the blimp industry.

Rick Sr.’s fondest wish in the world is to see his son become a rock star. Failure, as he likes to say, is not an option.

“It seems to me that people I have known over the years, if they have a backup plan, that becomes the plan,” he says. “The backup plan is to become a rock star.”

So he visited his old friend Pearlman in jail and proposed that the fallen boy-band impresario manage Biteboy. In exchange, Rick Sr. promised to donate 50 percent of all the money he makes managing the band to Pearlman’s restitution fund.

Pearlman agreed to the plan. “They have perseverance, talent and motivation. I heard a good clip,” he says, noting that he’s only heard them on the radio because there are no CD or DVD players in jail.

Managing a band to help pay restitution is actually something Pearlman’s lawyer proposed prior to sentencing. He asked a judge to delay his sentencing and grant Pearlman supervised access to a computer and phone line while in jail to help promote his most recent boy-band protégés, US5, in the United States. The request was denied.

But Pearlman did give Rick Sr. some contacts, and Rick Sr. found that calling on people in the entertainment business at the behest of Pearlman still opens doors. Being locked up, in fact, is very rock & roll.

“Boy bands will not take him back,” says Rick Sr. “They want you to be squeaky-clean. But rap will take him back, and rock will hug him to death.”

Pearlman agrees. “It hasn’t hurt them, their association with me. Look at Suge Knight, Don King, Robert Downey Jr. My thing has nothing to do with the music,” he says.

One of Rick Sr.’s calls was to Jonathan Murray, president of Bunim-Murray Productions, in Calif. If you haven’t heard of Murray, you’ve likely heard of his work: He and Mary-Ellis Bunim are considered the parents of reality TV, having launched MTV’s Real World back in 1992. Bunim-Murray now produces Keeping Up With the Kardashians, Living Lohan and The Bad Girls Club. He sees potential in a show about an imprisoned con artist directing a band’s career. The working title: Jailhouse Rock.

“We’re in discussions about a show where Lou Pearlman would be attempting to provide restitution by hopefully making Biteboy a mega-selling band,” writes Murray in an e-mail.

Is that possible? Is Pearlman’s imprimatur enough to make Biteboy a household name? Will anyone care if the music sucks? Such are the tough questions facing Biteboy.

Last week, the Nameys contacted Real Radio 104.1’s Monsters in the Morning show to try to secure a gig for the band at the June 20 Miss Monster 2008 contest. Turns out the show was more interested in Rick Sr. securing some tape of Pearlman reciting the jail’s lunch menu to play on the air than actually booking the band at the show. Pearlman, ever the showman, dutifully reported that Orange County inmates had goulash to look forward to that afternoon. The Monsters aired it, then told Biteboy to get lost.

And, in the interest of full disclosure, it should be noted that this publication has not been a friend to Biteboy. Our May 22 edition of Happytown™ described the band as “a gurgling pool of awful,” and our May 29 cover story, “Our Dumb State III,” lampooned the band’s association with Pearlman.

For the record, Rick Namey, who wears the band name tattooed on his arm and refers to himself as “Biteboy,” compares his group to other Florida bands like Lynyrd Skynyrd and the Outlaws. “We’re kick-ass rock & roll with a twist of Southern rock,” he says. Musical criticism is beyond the purview of this section of the paper, so we’ll withhold judgment here on the quality of Biteboy’s work.

If Jailhouse Rock is a go, Rick Sr. says a $5 million advance is not out of the question. That kind of exposure would propel the band to headlining tours on the House of Blues/Hard Rock Live–size venue circuit, which would add another $1 million a month to the coffers, he reckons. Doing the math, that means that if all goes well the band could be $17 million richer by this time next year. If Pearlman got half of that, he’d have shaved off eight and one-half months of his 200-month sentence. 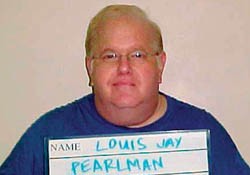 Pearlman sounds remarkably upbeat for a man who may never see another day of freedom in his life. He doesn’t allow himself to think the worst.

“I don’t know what life is like in jail,” he says. “I don’t plan to spend life in here. This is a very unique experience. There are a lot of interesting characters. There really is no life in jail.”

He refers to himself as a “victim of circumstance,” as opposed to a criminal who got busted and must now pay the price, like many of his fellow inmates. Most people would be dour about the prospect of eternity behind bars, but most people are not Lou Pearlman.