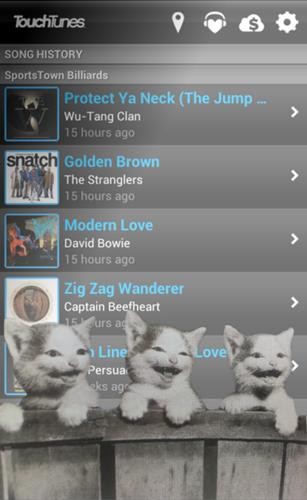 Jukeboxes, in their nostalgic glory, are being totally edged out of bars in favor of a TouchTunes offering that alleviates the formers’ limitations regarding song selection, with a fairly broad digital music library to search, rather than flipping through hefty pages full of pre-determined, somewhat tired CDs. Sportstown has had TouchTunes for more than two years, but it took me an absurdly long time to recognize the potential this opened up for me when I'm there watching a basketball game or salting the shuffleboard table. While I kinda loved the forced soundtrack of Pantera and Run DMC, they've been shoved aside and replaced by Queens of the Stone Age and 2 Chainz, the artists I heard people playing most on my recent visits there.

Which is all fine and good. We gotta evolve. But here’s the thing. When you’re in a sports bar – in a pool hall, no less – there are rules you must follow. You can’t get all willy-nilly with the atmosphere just because there’s a sexy new enabler in the room. So I decided to search the improved library for some rap and rock songs that would keep people bobbing their heads and feeling like prize champions when they win their little games. This playlist is tested in Sportstown and seemingly approved by those in attendance. (Trust me, I struck out a lot with my song choices and people are way less forgiving when you drop a song bomb considering all the options now available.)

Some quick notes – This post was inspired by a recent visit to Sportstown that I've detailed in this month's Feedback (May 22). A caution: Motorhead is the loudest greatest shit on earth despite being a three-piece, and the jukebox respects it. You will be thanked: People responded overwhelmingly positively to T. Rex’s “Jeepster,” and one girl even sought me out to thank me for playing it. It was weird. Lastly: You have access to a digital jukebox with a kinda massive library. If there’s something you want to hear, just play it. Cheers.