Waiting for Superman: Truth, just us, and the American way

You know the unemployment crisis is ongoing when we can’t even be sure there’s a job for Superman.

The big guy turned 75 this week, just two days after the world saw the final trailer for his upcoming, make-or-break cinematic reboot, Man of Steel. And it isn’t only Time Warner that’s wondering if that world still has a place for him. 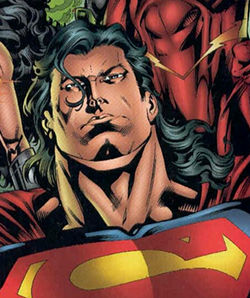 The '90s were tough on everybody.

The '90s were tough on everybody.

For 50 years, Superman was unrivaled as popular fiction’s greatest symbol of all that’s right about the American national character. But for the past quarter century or so, he’s been a problematic potential anachronism. His last movie, 2005’s Superman Returns, was a broody, emo-inflected  dud; meanwhile, back in his medium of origin, DC Comics has tried hard to keep him “relevant,” giving him everything from a mullet to a Muslim buddy (quickly withdrawn) to a hoodie. (Wear that thing in Sanford, and you’d better be bulletproof.)

The arguments for Superman’s outmodedness are essentially twofold. The first is that he’s simply too much of a goody-goody to be relatable by sophisticated modern audiences. That image of the character as an overgrown Boy Scout doofus was cemented by Frank Miller’s 1986 graphic novel Batman: The Dark Knight Returns, which depicted Supes as the dutiful lap dog of a barely disguised Ronald Reagan. The portrayal was meant as satire, but a joke has a troubling way of becoming a paradigm when it actually turns a profit. Since then, the public has mostly seen Superman as a naive foil for more “complex” heroes like Bats and Wolverine.

Such dismissals, though, ignore the character’s origins. When he was introduced in 1938, Superman was a frequently angry social crusader who took on the enemies of the poor and oppressed, including exploitative coal-mine owners and cowardly wife-beaters. What else would one expect of a character created by two young Midwestern Jews high on the promise of liberalism?

In the past few years, the brilliant comics writer Grant Morrison has re-embraced the progressive foundations of Superman’s past. And the promotional materials for Man of Steel take pains to show that its own Superman isn’t some off-putting Krypto-fascist: That poster of our hero in chains, apparently under arrest by the military, couldn’t do more to court the Coalition of the Ascendant. 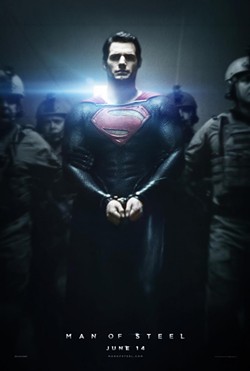 The second argument against Superman’s applicability to 21st-century sensibilities is that he’s simply too powerful to be compelling. How can we invest truly and completely in  any character who can change the course of mighty rivers, bend steel in his bare hands and understand the flashbacks on Mad Men immediately, on first pass, without having to hit the remote?

That’s certainly a valid concern if your idea of narrative is limited to physical peril; it’s also why God invented kryptonite. But at the risk of alienating the Dr. Sheldon Coopers of the world, there’s more to pulp fiction than who can beat up whom. A few years ago, the aforementioned Grant Morrison took part in a New Yorker Festival panel I attended, where he made the intriguing claim that the dichotomy between Superman’s physical abilities and his emotional fragility is what makes the character fun to write and read. As Morrison put it, there’s simply something endearing about a guy who can move entire suns yet have his day ruined by an ill-chosen word from Lois Lane. Paging anybody who can’t relate to that.

I’d add that a wholesale rejection of Superman’s invincibility misses a crucial distinction. Our pal Kal-El isn’t interesting because he can do everything, but because he can do anything. As viewers, we get to choose which of the character’s abilities and priorities best meshes with our own, then wish-fulfill the hell out of it. We receive (in an intellectual sense) that superpower as a metaphor for the difference we ourselves can make with the skills we’ve been handed. When the material is presented correctly, an audience can process and accept such a metaphor without even thinking about it (particularly younger audiences, who are under constant reminder that their entire lives are miniaturized metaphors for the real thing).

So we don’t need a very overt message that we can be like Superman; the only question is if it’s worth it to try. That’s the real hurdle Man of Steel has to clear if it is to be successful in returning the character to the forefront of hero culture: vindicating the belief that doing good for good’s own sake is more than a well-meaning exercise in futility. 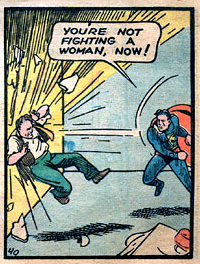 Big Blue has ways of shutting that whole thing down.

Big Blue has ways of shutting that whole thing down.

This week, a group of heroic parents sucked up their grief and flew to Washington in an effort to move our world closer to justice. Instead, they were thwarted by the naked greed that holds sway over the Lex Luthors of the United States Senate. It was the sort of setback that all but defines the word “demoralizing.” It was also a moment that cried out for an empowering symbol to point the way forward -- for someone to show us that a never-ending battle is the noblest one to join. A job for Superman indeed.

In the Man of Steel trailer, our hero tells Lois Lane that the symbol on his chest isn’t the English letter “S,” but the Kryptonian symbol for hope. (Cue the howls of fury from talk radio.) He explains that his human father warned him to keep his gifts hidden: “He was convinced that the world wasn’t ready.” The thought hangs in the air for a second before Superman opens up the floor to debate: “What do you think?”

It could be the best audience-manipulation line ever put in a trailer. Every time I’ve heard it, I’ve been alone in front of my computer, not in a theater surrounded by my fellow mortals. But each and every time, I could have sworn I detected an entire nation, beaten up but not vanquished, whispering a passionate “Yes. We’re ready.” And I didn’t even need super hearing.