Fringe Review: ...SINCE CARRIE: A Celebration of (Recent) Broadway Bombs! 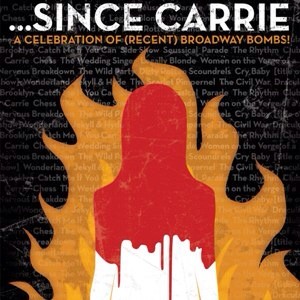 Here's my confession: I'm a closet fan of Taboo, Rosie O'Donnell-produced Boy George musical. No numbers from that nuclear bomb are included in ...SINCE CARRIE: A Celebration of (Recent) Broadway Bombs!, a celebration of critically and commercially cursed shows that failed to recoup their Broadway production costs. Eric Michaud, who admits to attending Dance of the Vampires 3 times ("it was awful, and I loved it"), leads vocalists Emily Heffelinger, Erin Johnson, Piper Rae Patterson, and Joshua S. Roth, with Christopher Leavy musical directing from the piano.

The set list starts with the title song from the titular train-wreck (the show's title is a play on Ken Mandelbaum's book Not Since Carrie: Forty Years of Broadway Musical Flops) and continues with more than a dozen musical numbers from memorable misfires. Blockbuster movies that busted flat on Broadway are well represented, and the revue finishes with a "Frank Wildhorn Megaflop Megamedley." There are also super-obscure selections, like a song from the Nazi swing musical The Rhythm Club, which closed out of town before ever even making it to Off-Broadway. Though I consider myself fairly well-schooled in Broadway lore, I was previously unfamiliar with several of these songs.

Most of the selections are much better than the failed shows they clawed their way out of, and all receive better renditions here than they probably deserve. The cast all have fine voices, and the audio mix at the show I attended was unusually pleasing for a Fringe show.

It's certainly sad that, as Michaud says "smart shows can't find their audience, yet Mama Mia keeps on running," but Since Carrie successfully squeezes a lot of fun failure into 50 minutes.

... SINCE CARRIE: A Celebration of (Recent) Broadway Bombs!