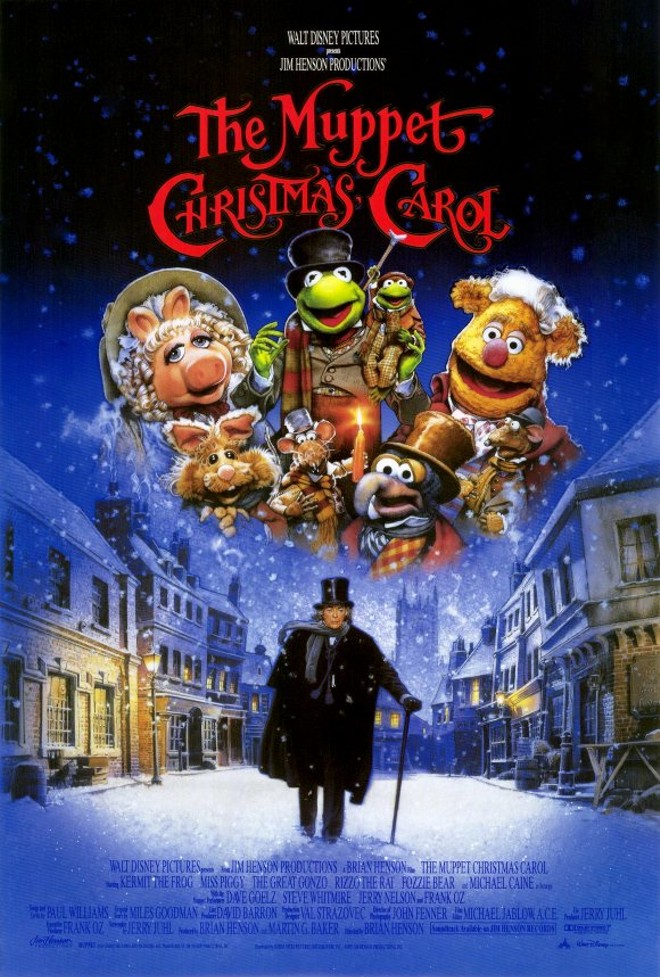 The success of Jason Segel’s Muppets reboot rests in part on the accepted wisdom that the three Muppet features made after Jim Henson’s death are inferior to the three that were released while he was still alive. And that’s essentially true. But the best of the second trio is clearly The Muppet Christmas Carol, an endearingly earnest take on the Dickens classic that’ll make a timely addition to your holiday  home-viewing list -- and not just because felt is suddenly all the rage again.

It isn’t a perfect film, mind you -- not by a long shot. In the role of Scrooge, Michael Caine lacks the full nastiness that’s required (even by the relatively benign standards of the Muppets). In some places, his toned-down humbugging even slips into the realm of nonacting: You don’t have to look too closely at an effects shot of Scrooge and the Ghost of Christmas Past zooming across the English countryside to notice that Caine is evincing no reaction whatsoever; it’s as if director Brian Henson simply forgot to tell him the camera was rolling. Caine is also, to put it nicely, no singer -- a pretty significant failing in a musical, although he’s hardly alone in it.  Stalwart Muppet tunesmith Paul Williams contributed some catchy numbers, but there isn’t a voice in the cast that can really sell them (again, even by the highly forgiving Henson standard).

So much for drawbacks. Otherwise, the movie is pretty brilliantly realized, with an impressive sense of scope and a moral righteousness that does the source material proud.

The London set teems with all manner of creatures, including actual people, Muppet people, Muppet pigs who dress like people, Muppet vegetables who talk like people, and even Muppet mice who poke their heads out from within brick walls to beg for a slice of cheese. The biodiversity is instant and complete -- and so natural that we sometimes almost forget how funny it really is. In a hilarious bit of visual “logic,” Bob Cratchit, who is “played” by Kermit, and Emily Cratchit, who is portrayed by Miss Piggy, have four children: The girls, Bettina and Belinda, are both sows, while the boys, Peter and Tiny Tim, are amphibians. This is what Rick Santorum is so worried about.

In a recent New Yorker piece, Segel laid down the rules he had received from the guardians of the Henson legacy while prepping The Muppets; one of the most important was “The Muppets do not self-identify as puppets.” Their Christmas Carol went it one better: Not even the humans seem to observe any distinction between themselves and the less corporeal types who are wildly cavorting amongst them. It’s a key strength of the film that every one of the live actors manages to avoid the self-satisfied mugging that lesser thesps feel is required of a “puppet movie.” And if that doesn’t sound like any great feat, remember what years of watching the Muppets on TV taught us: Not everybody is Sandy Duncan or John Cleese when it comes to comfortably interacting with manipulated Americans -- which is how we got the painfully awkward spectacle of seeing an adviser to four U.S. presidents sweat through an interview with Kermit on CNN. (Yes, this actually happened:)

By the time we reach a later scene set inside the home of Scrooge’s nephew, Fred (Steven Mackintosh), it barely registers that he and his wife (Robin Weaver) are people, while their party guests are furry monsters. They don’t seem to mind or even notice, so why should we? Thus is Dickens’ egalitarianism taken to an absurd but logical extreme.

And this is Dickens’ story, make no mistake -- not a toothless vaudeville sendup, but an admiring morality play put on by the like-minded. A single, bracing shot of the homeless Bean Bunny shivering in the winter cold establishes quite nicely that nobody here is interested in pulling punches. A Christmas Carol may have been diluted and defanged through decades of adaptations and “updates,” but the Muppets remember that it’s about something -- not just the redemption of a single soul but the collective responsibility that soul embodies.

Honestly, it warms your bleeding heart. I’ve always found it strange how we as a culture tend to shrug off the inherently liberal bent of some of our most cherished entertainments. For example, I’ll go to my grave swearing that it’s impossible to jettison the New Deal boosterism from It’s a Wonderful Life, yet millions of people every year find a way to do just that. They also manage to enjoy A Christmas Carol while looking down their nose at “entitlements” -- and some of them even misread the Muppets, too. One of the most ridiculous “news” stories of 2011 was the conservative outcry that the Segel film is “communist” for depicting an oil baron as its antagonist. A commenter on one far-right site I visited lamented what this new generation had done to “her” Muppets.

Excuse me, but were we ever under the impression Jim Henson was not a hippie?  This is the guy who once had a bunch of woodland creatures sing Buffalo Springfield’s “For What It’s Worth” while hiding their offspring from oafish but deadly hunters. That’s not exactly the kind of resume entry that gets you in good with the American Legion or the John Birch Society.

Henson may have been dead and gone by the time The Muppet Christmas Carol was made, but his worldview is all over the thing. We can hear him snickering along while Sam the Eagle, as the young Scrooge’s school headmaster, fatuously extols the virtues of “business” -- savoring the word over and over like he’s stumping for a Koch brothers donation. And we can sure feel the spirit of old Jim looking over our shoulder as we peer through the window of the Cratchits’ home, marveling at the gratitude on display therein and contemplating a future Christmas with one less merry-maker at the table.  “How will we endure it?” Caine’s Scrooge wonders.

And that ain’t just the royal “we,” folks -- especially not this Christmas. At a time when supposedly serious policymakers are basing their platforms on the idea that suffering does the underclasses good, it behooves us to hoist a Tiny Tim -- even a green Tiny Tim -- on our shoulders and whisper, “Not on my watch.”