Right when we were marveling at how long it had been since a member of Food Not Bombs was last put in handcuffs, Orlando’s senior anarchist Ben Markeson called to notify us that on Dec. 15, he had finally received the honor of leaving a food sharing at Lake Eola Park in a police squad car. Markeson was charged with "resisting an officer without violence" after inserting himself into a discussion between city police officer Noah Pruitt and a Food Not Bombs volunteer. According to the charging affidavit, the volunteer was idling in a car parked at the end of Osceola Avenue when Pruitt told her that there was no parking or stopping allowed in the area. The volunteer acknowledged this, but didn’t stop the homeless denizens of the park from continuing to unload food from the car, as they do every week. Pruitt then told the volunteer to turn off the car. Markeson told Pruitt that the car needed to remain on to avoid a parking violation, though he was evidently unaware that even idling, manned (or in this case, womanned) cars were recently forbidden by this particularly prudish cul-de-sac. New signage, believed to have been put up Nov. 30, not only outlaws parking within the circle, but also stopping or standing around it. (The city could use a good editor: the sign features a “no parking” symbol, followed simply by the phrase “STOPPING OR STANDING.")
click to enlarge 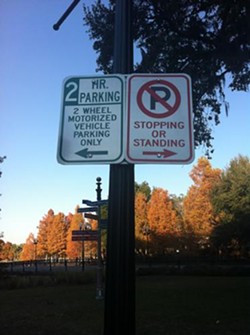 According to officer Pruitt, Markeson had "yelled" at him and refused orders to step backwards from the car. Markeson, however, says he was obedient and contends that it was Pruitt who got angry. "He started to get more belligerent as the seconds ticked by," Markeson says of the officer. "Next thing I know, he’s grabbing my wrist and twisting it behind my back." Markeson is retaining counsel from lawyer Jacqueline Dowd, who, as we reported last month, will also be representing Food Not Bombs in a February re-hearing of the group’s federal lawsuit against Orlando’s “group feeding ordinance.” Besides the charges against Markeson, Dowd also finds it ridiculous that standing or stopping would be outlawed at a sidewalk-lined circle which seems to encourage, well, stopping and standing. “I wonder what the circle is for, then – maybe to drive around for the fun of it, to make the kids in the backseat dizzy?” she says. Naturally, Markeson, who invoked U.S. plans for war on Iran in our discussion, believes the police’s presence near the park was calculated intimidation, not routine parking duty. “I’d seriously doubt you’d find police leaning against their cars any other day of the week, doing parking enforcement [next to the park],” he said. Orlando police spokeswoman Barbara Jones, communicating with the Weekly through email, says that officers are doing parking enforcement “all the time” in the area.