I can hear Harlan Ellison screaming from here

Here’s a fun quiz for a dull Wednesday: Which of the following quotes is from lamestream-cinema kewpie doll Jessica Alba, and which represents the thinking of Waiting for Guffman’s Ron “Lunt of Blaine” Albertson? 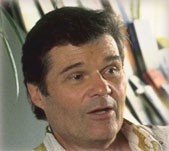 A.     “Good actors, never use the script unless it’s amazing writing. All the good actors I’ve worked with, they all say whatever they want to say.”

Of course, you could just cheat and find the answer here. But that wouldn’t be nearly as satisfying as figuring out for yourself just which comment came from a fictional character who remains one of the screen’s most memorable fatuous clowns -- and which one is Ron’s.