MARC WITH A 'C' After five years of quirky acoustic odes to nerdy girls, Laura Prepon and mall sluts, among other things, Orlando's version of Jonathan Richman, Marc Sirdoreus, is finally packing in his 'Marc With a 'C'" persona. "Being 'Marc With a "C"' is very confining," says Sirdoreus. "And I'm sick of playing silly pop songs." Although he won't be giving up music entirely – he still plans on recording here and there – he says he has no immediate plans. "I want to be free to do whatever, whenever the hell I feel like it." And to bring his career around full circle, Sirdoreus is returning to one of the places where he got his start: as the fill-in for a very late Precious. Come out and say goodbye, or domo arigato, Mr. Roboto, himitsu wo shiri tai. (with Steve Garron, Bucket of Nails and Holidaysburg; 4 p.m. at Back Booth; 407-999-2570; $5) 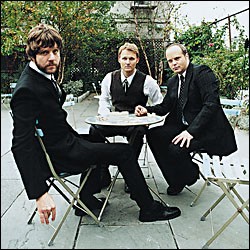 MEDESKI MARTIN & WOOD We were skeptical of MM&W when they were just a plain ol' New York jazz outfit. Their funky vibe was touched with just enough avant flavor to make us not totally hate 'em, though. Over the years, as their fan base has grown to include jam-band fans and white-bread fusion aficionados, it stands to reason that our skepticism would likewise grow into full-bore hatred, but to our surprise, the opposite has happened. The group's last couple of records have grown more and more subtly adventurous, with MM&W somehow splitting the difference between a funk band and a prog-rock outfit. We're not sure we'd still call 'em a "jazz" group, but they sure know their way around an improvisation. (7:30 p.m. at House of Blues; 407-934-2583; $17.50-$19.50)

MEATOUT WALK Officially, Meatout 2005 will be held on the first day of spring, March 20, and is an internationally celebrated affair with a 20-year history (www.meatout.org). Here in town, the Orlando Animal Rights Alliance is jumping a couple of weekends ahead of the game, hosting an activist walk at scenic Lake Eola (with its swan sentries) to gather and engage like-minded vegetarians, vegans, animal rights activists and other assorted enthusiasts. Food will be key – it always is – and for those apprehensive about tasting the promised "yummy vegan snacks," this is a chance to satisfy that curiosity in a safe environment. Prizes will be raffled and local animal rights/vegetarian organizations will be ready for hard talk. Taste the counterculture. (noon to dusk at Lake Eola Park; [email protected]; free)

WINTER PARK ST. PATRICK'S DAY PARADE Hold your nose all you want at this city's reputation for socialites and cellulite, but this family-friendly parade is a small-town wonder. If you're the type that gets choked up by the sound of marching music proudly played by schoolchildren toting instruments and wearing uncomfortable uniforms, tears will be streaming. If you're the type that loves to get trashed in public and yell at moving bodies, the WPPD will be on your ass, green or not. The procession rolls from north to south, golf course to city hall, and then there's plenty of time to wind down at a truly Irish after-party – where everybody's happy – at Fiddler's Green and the like. Or stay in the park for Irish music and dance before and after the show. (2 p.m. on Park Avenue, Winter Park; 407-366-3402; free)

H8 You may know Natalie Weiss from the local band Unicornicopia or from their appearance in A Metamorphosis from last year's Fringe Festival, and you may recognize Travis Stewart as the man behind IDM phenom Machine Drum, but chances are you will not recognize the two together in the lo-fi sci-fi glitch-hop act H8. As galaxy-bouncing aliens Clytemnestra (Weiss) and Aegis (Stewart) from the planet OgleTR56B, their show is part Greek mythology, part Space Oddity and part expressive dance. The duo's songs travel through a chaotic flurry of unconventional and futuristic beats and distorted blips – the sheer unpredictability alone makes it worthy of a listen – but what's more interesting is that there's a thematic purpose behind it all. "`Through these characters`, I want to explore the tension between male and female, whether it's mother/son, boyfriend/girlfriend ..." says Weiss. The band just finished up a CD they'll be releasing shortly, and after this show they're heading up the coast for a tour with "their sworn enemies," The Band of the Name. After that, expect an entire Eastern Seaboard full of H8-mongers. Seriously, they're that good. (with The Band of the Name, Machine Drum; 10 p.m. at The Peacock Room; 407-228-0048; free)

OPEN HAND We're not too fond of the two headliners on this bill, but when we got our hands on Open Hand's second album, You and Me, we were blown away. The packaging, with its psychedelic die-cut artwork, let us know we weren't dealing with a typical Trustkill band – but it was the powerful attack of the album's 14 tracks that was truly impressive. Taking metalcore to an entirely different plane of organic complexity, Open Hand engages in everything from boozy swoons and doomy groove to prickly, post-metal assaults. There's a lot going on with them that isn't metal, but all save the most Neanderthal metalhead will dig 'em. (with The Juliana Theory, Zao, Takeover UK; 6 p.m. at The Social; 407-246-1419; $12)

FOURTH ANNUAL FABULOUS FRINGE FUNDRAISER Fringe folks are banking on the love of its many fans and their willingness to drop $25 for this insider pep rally/party. Hopefully the 199 tickets will sell out, as it takes creative funding plus creative energy to pull off the 10-day Fringe Festival (the 14th annual is May 19-29) – and there's no shortage of the non-green ingredient, as evidenced by the evening's lineup. The loopy Oops Guys play hosts to hostess Miss Sammy, and the saucy duet by locals in vogue Becky Fisher (Nirvanov) and Janine Klein (Wanzie's Living on the Edge) should be a thriller. Tom Kimbro (iMPACTE! Productions) will tinkle the keys, and before the show is over, Broadway veteran Davis Gaines – born right here in Orlando – will step into the spotlight (but not to sing). Watching these unregulated theater people blow off steam should indeed be fabulous. (6 p.m.-9 p.m. at The Peacock Room; 407-648-0077; $25; advance purchase recommended)

STEVE VAI Of all the '80s guitar shredders, we like Steve Vai the best, simply because he's the looniest. (Not the most psychopathic; that would be Yngwie "Unleash the Fucking Fury" Malmsteen.) Vai's stint with Frank Zappa was either a formative experience or a natural fit, but suffice it to say that Steve Vai is one weird – and extremely talented – dude. His extraordinary fretboard-burning abilities are, thankfully, tempered with sizable doses of humor, psychedelia and a deep-seated musicality, all of which combine to keep you from being able to call him a complete showoff. Plus, he's a beekeeper (as in, one who keeps bees … seriously), and that's nothing if not totally cool. (with Eric Sardinas; 7:30 p.m. at House of Blues; 407-934-2583; $19.50-$43) 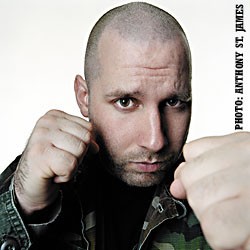