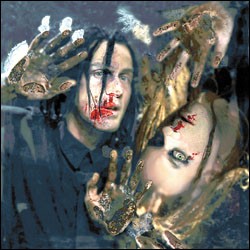 SKINNY PUPPY Oh, man are we stoked about this show. Not only because we're getting to see Skinny Puppy nearly 10 years after the last time we witnessed their scary-ass live show, but also because the oh-so-amazing Otto Von Schirach is opening the show. Whereas Skinny Puppy was legendary in their heyday for delivering one of the most impossibly brutal live shows around, Herr Von Schirach is now known for delivering one of the most insane. His recent free gig at Peacock Room (yeah, it was free and yeah, you missed it) was one of the best nights out we've had in a long time; so cool was it that we nearly lost an eye to objects flying from the stage thanks to the spazzy intensity of the sampler-bashing. However, Skinny Puppy fans should fear not: As great as Otto is, Skinny Puppy is still (again?) an extraordinary live experience. While many of their "industrial" counterparts have chosen to emphasize the metal or synth components of their music, Skinny Puppy emphasizes their horrifying aspects with a dark and assaultive presence that must be seen to be believed. (with Otto Von Schirach; 8 p.m. at House of Blues, 407-934-2583; $19.50-$46)

CZECH INDEPENDENCE DAY Part of being a multicultural society is "celebrating diversity," so here's a chance to observe Czech Independence Day. In honor of the nationality of its namesake sculptor, Albin Polasek Museum and Sculpture Gardens will greet celebrators with free admission and tours. The historic enclave along the shores of Lake Osceola in Winter Park is naturally picturesque, never mind Polasek's mythological figures that appoint the grounds or the Old World splendor of the rich paintings in his house turned museum. More to the point is a reminder that Polasek – considered one of the most significant sculptors of the 20th century – was born in Morovia in 1879, which became part of the Sovereign Republic of Czechoslovakia on Oct. 28 1918; that's the date that's being honored here. In 1993, the republic was war-torn into two independent entities, Slovakia and the Czech Republic (where Morovia ended up). Tellingly, in the late Polasek's credo, he wrote, "Through sculpture which artists left behind them, we can see the ways of civilization moving up and down. The nations of the past are gone, but there still remains their art to tell us what they were." (10 a.m.-4 p.m. at Albin Polasek Museum and Sculpture Gardens, Winter Park, 407-647-6294; free)

FORBIDDEN FEARS One of the highlights of Mad Cow's Scare Me a Story storytelling event is for adults only. You heard right: ghost stories for grown-ups. "We're going for a more intellectual or cerebral sense of horror," says producer Chris Gibson. "We're going for less of a 'boo' and more of a psychological disturbance." Gibson promises a lot of graphic images, both visual and oral, as actors hauntingly deliver published writings (by authors the likes of James Joyce and Bret Easton Ellis) as well as new originals. The 45-minute "montage of fear," says Gibson, will be balanced by a "sense of humor," but is definitely for adults 18 years and older. For something more tame, he's produced a kids' program, "Creeps for Kids," and one for the whole family, "Family Frights," that'll be performed throughout the weekend as well. ("Forbidden Fears," 9:30 p.m. Friday and Saturday at Mad Cow Theatre; 407-297-8788; $12; www.madcowtheatre.com)

MINISTRY Oh, man are we stoked about this show. Oh, wait ... we said that already, didn't we? Anyway, our long-suppressed inner goth is gonna be getting quite a workout this week, and, honestly, besides a Bauhaus show or a set by Joy Division (complete with a decomposed Ian Curtis on stage), we can't think of anything more appropriate for Halloween than going to see Ministry. They wrote a freakin' song called "Halloween," for wicca's sake. (Yes, we know it was lame, but that's okay.) Al Jourgenson's the dude whose house you totally don't want your kids trick-or-treating at, but they'd be all wanting to go because of the tinfoil-covered windows, mossy black gate and cow skulls in the front yard. And you would be wanting to go too, hoping to sneak a peek at all the muscle-cars-on-blocks in the front yard, and maybe (just maybe) you'd be able to score a mescaline-laced candy bar or an apple with a heroin needle poking out of it ... or something. Knowing we'll never be in East Pigfuck, Texas, or wherever it is that Jourgenson lives now, we're quite glad that he decided to come here for Halloween. All those scary samples of both George Bushes. All those heavyheavyheavy guitars. All those memories of aspiring to one day be as decadently evil as Jourgenson. We can't hardly wait. Plus, he's bringing along My Life With the Thrill Kill Kult, so we're likely to collapse into a full-on weepfest of Wax Trax nostalgia when we can't decide if we're cooler than Jesus or if Jesus built our hotrod. (with My Life With the Thrill Kill Kult; 7:15 p.m. at House of Blues, 407-934-2583; $22.50-$50)

THE CHOICE 2004 Enough already with fronting and cussing about presidential candidates, fighting over a mess of facts and fiction – especially among family and friends. Simmer down and set the reminder button on the TV to catch the last airings of The Choice 2004 before the election. The two-hour film is a special edition of Frontline, the PBS series relied upon by sane folks around the country, both Republican and Democrat, for journalistic integrity. As reported in the Wall Street Journal, the film "offers a sustained examination of a subject to which the Kerry campaign has devoted conspicuously little attention, namely the candidate's Senate history – particularly his opposition to any American military action. … Still, it very soon becomes clear this film offers George Bush's handlers significantly more occasions for wincing – or would, if most of those occasions didn't concern already well-known and chewed-over matters." Fascinating archival footage has been found, including Kerry voicing his concerns about going into Afghanistan without a plan. The Choice is about as truthful as it gets on TV. (airings 5 p.m. Sunday and 9 p.m. Monday on WMFE-TV)

MATES OF STATE These two are so on our nerves. It's not that we don't like to listen to them. Their music is pleasant and poppy and it puts an irreversible smile on our face. Nor is it that they're so happily in love. And married even. We respect that, encourage it and fully understand that no matter how much we love our significant other, we've never put our relationship through the unimaginable strain of an indie-rock tour. No, it's not the music and it's not their giddy little love story. It's their stupid, smiley-face attitude. Have you ever seen a picture where these two weren't either gazing lovingly at one another or smiling goofily into the camera? Neither have we. We're firm believers in angst and sharing misery around here, and, sad to say, MOS just don't meet our wretched little criteria. Haven't they heard that anger is cool and that dewy-eyed bliss is against the rules? Guess not. (with Bishop Allen, Motion Picture Massacre; 9 p.m. at Screamers, 407-244-0299; $8, $10)

SANDER KLEINENBERG When the new Sander Kleinenberg double-disc set arrived in the mail, it was just the mood elevator we needed. Loaded with irresistible, hook-laden house grooves and barbed with industrial edges, Kleinenberg has truly outdone himself this time around. We've been getting increasingly bored with Oakenfold and his minions, and Kleinenberg provides a progressive funk respite that's equally melodic, but with more vocals and, overall, much more character. And we're terribly impressed with the way he knows how to have fun – Kleinenberg knows better than to take himself too seriously, and that carefree attitude radiates through his set, which contains some righteously ass-shaking club confection. We found the libidinous grind of Infusion's "Do to You in '82" particularly hard to resist, complete with its early-Prince sample. Equally fierce is the Tiefshwarz Dub mix of Spektrum's "Kinda New," which is currently all the rage in the U.K. Even the melancholy of the Junior Boys' "Birthday" packs an unexpected wallop that keeps you coming back. When Kleinenberg brings his audio-visual caravan to town for a live recital, it ought to leave even the most practiced club maven sore in the legs. (with Dave Cannalte; 10 p.m. at Icon, 407-649-6496; $10)