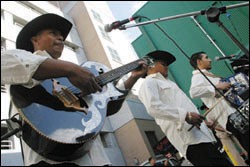 OLAFEST Orlando is a town full of "first annual" festivals that never live to see a second edition, but the 2,500 people who turned out for last year's debut Orlando Latin American Film and Heritage Festival have become the base audience for a follow-up that's designed to further enrich our understanding of the Latin experience through films and other media. To devise an event schedule with "the most wallop," producer Nelson Betancourt has taken a page from his own past: There's a high-profile screening of the Castro-era propaganda film I Am Cuba, not seen here since a memorably confrontational screening that Betancourt helped plan some eight years ago. (Unlike that Russian-dubbed version, this one is in Spanish with English subtitles.) It's joined by the background documentary I Am Cuba: The Siberian Mammoth (see review), which puts the first movie's idyllic portrait of Cold War Havana into the proper historical context. Meanwhile, the festival's flesh-and-blood component is provided by al fresco celebrations at Lake Eola and LYNX Central Station, where the "Latin Americana" band Quijerema will perform their soundtrack to the film Pablo Neruda Presente and UCF theater students will dramatize Pam Munoz Ryan's children's novel Esperanza Rising. Book giveaways, a poetry night and a Chilean wine tasting are also on the docket, and Cuban actor Reynaldo Miravalles plans a visit to coincide with a screening of his El corazón sobre la tierra. Our only question: What's Spanish for "wallop"? (Opening reception 4:30 p.m.; events through 11 p.m. Sunday; DMAC and various downtown locations; 407-992-1200; screenings $5, $7; all other events free; festival pass $50; www.olafest.org)

LATIN FEST The styles of Latin dance – flamenco, salsa, merengue, cha-cha, rumba – are as many as the cultures from which they were derived. This daylong showcase is notable for its variety, highlighted by Spanish guitarist Guillermo Serpas, Mexico's Huitzilin-Aztec performers, Folkloric Portuguese of Orlando, Flamenco del Sol and Tacon Flamenco Dancers, as well as folk dancers from Panama, Venezuela and Puerto Rico. Caribbean food and music also will help to fuel the dancing fool within us all. (11 a.m.-9 p.m. at Avalon Park; free; 407-658-6565)

ORANGE COUNTY COMMUNITY BIKE FESTIVAL It was fairly well publicized late last year that statistics from the National Highway Transportation and Safety Administration showed that Florida was No. 1 in bicycle-related deaths – mostly from head injuries. Our overcrowded, ill-planned roads are not friendly to two-wheelers, especially Colonial Drive, one of the deadliest stretches in the whole country. What to do? Wear helmets, please, so at least you have a shot at surviving. Orange County government – doing the best it can with what it's got to work with – is holding a Community Bike Festival to promote safe and healthy pedaling. Commissioner Linda Stewart is behind this project, having developed a five-hour schedule of events with free T-shirt giveaways, pro BMX rider demonstrations, bicycle history displays, storytelling and kiddie activities. Also, Orange County Fire and Rescue will show off their FireStar Helicopter and Squad One Heavy Rescue Hazmat vehicle as a reminder of who and what is responsible for scraping the unfortunate off the asphalt. (10 a.m.-3 p.m. at Downey Park, corner of East Colonial Drive and Dean Road; free; 407-835-0020)

WU-TANG CLAN On one hand, this is a little gross. By the time ODB shuffled off this mortal coil in 2004, the Wu-Tang was creatively spent as a joint venture. Some of the individual members – RZA, Raekwon and Ghostface especially – continue to be the cracked geniuses they always were, but wow, were we tired of all the third-rate (and worse) coattail riders who managed to have a "Wu-" affixed to their name. Plus, Iron Flag was pretty weak. It was time for it all to end, and with ODB's death, 2004 seemed an appropriate time to close the books on one of the most fantastic chapters in hip-hop history. So this blatantly cash-grabbing "reunion" makes us feel a little weird. (RZA straight-up admits that he's doing this to drum up some funds so ODB's family's taken care of … which makes it blatant, but not disgusting.) But on the other hand, we'd be lying if we said we weren't more than a little excited to see what's destined to be a trainwreck of a live performance. When you jam all nine (Cappadonna's taking ODB's spot) of these certifiable weirdos onto one stage – massive egos and massive talents all – it's gonna be nothing but off-the-rails chaos, which is exactly why we love Wu-Tang in the first place. This is the last date on the tour, so expect it to have an extra touch of insanity. (8 p.m. at Hard Rock Live; $25-$35; 407-351-5483)

P.O.S. It takes a lot to hold your own on a tour with Atmosphere, but as anyone who witnessed the triple-strength attack of P.O.S., Blueprint and Atmosphere at last year's Anti-Pop festival knows, the Midwestern monster that is P.O.S. is more than up to the task. Ferociously grafting punk rock attitude onto hip-hop poetry without attempting to be cute about it, his performances are vitriolic and energetic affairs. But don't be fooled – he's a top-shelf lyricist with a cunningly original delivery. If you can stop rocking out long enough to pay attention, you'll be duly rewarded. (with Turbo Nemesis, Cyne, Mac Lethal, SIMS; 8 p.m. at Will's Pub; $7; 407-898-5070) 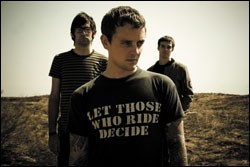 THE LOVED ONES Stage crew graduates have a healthy history in punk rock, from former Sick of It All speaker-haulers (H20's Toby Morse) to erstwhile Melvins apprentices (Kurt Cobain). On the dark side of opportunity, rapper Rob Aston (Rancid, A.F.I.) became a roadie to ruin for his new outfit, single-handedly making the Transplants intolerable. Dave Hause, once a stage manager for Kid Dynamite and Bouncing Souls, now fronts The Loved Ones, and the trio's just-released debut full-length Keep Your Heart places him in the success-story category. Hause clearly absorbed the signature skills of the groups with which he toured (group-hug choruses, chugging-riff verses), and he recruited a capable, colorfully named rhythm section (bassist Spider and drummer Mike Sneeringer). The Loved Ones' brand of melodic hardcore & roll was much more popular six years ago, before whinecore infested the Warped Tour, but the Philadelphia-based band smartly found a tourmate (NOFX) that draws capacity crowds predisposed to embrace nostalgic punk sounds. (with NOFX, The Lawrence Arms; 7 p.m. at House of Blues; $20; 407-934-2583)