CLEAR STATIC Zapped in from the outer realms of popped image and blaring overproduction previously orbited by Sigue Sigue Sputnik and Frankie Goes to Hollywood, Hollywood's super-sweet Clear Static may initially curl the tongue in a diabetic reaction. In theory, their self-titled Maverick debut is a younger, gayer brother to the Killers' Hot Fuss, all dressed up with nowhere to go on a suburban Saturday night. But this quintet of barely-20s with plastic pants and haircuts to match packs enough bass-slapped power-pop hooks to make John Taylor's perfect jaw drop. Appropriately, the band spent a good part of last year opening for Duran Duran on their arena comeback tour, impressively holding up against the greatest hits hopes of an admittedly older audience. Why? Because one listen to their album and it's back to shameless Star Hits moments, curled up in bed with your stereo on, hating your parents. And they're totally cute and totally awesome live. Totally. (with Shiny Toy Guns, A Lightning Mouth, Memoranda; 8 p.m. at Back Booth; $7; 407-999-2570)

CENTRAL FLORIDA HOME AND GARDEN SHOW Get your gardening gloves ready because the Central Florida Home and Garden Show is coming back to town. Your green thumbs are going to have a field day with over 6,000 square feet of landscaped gardens at the Orange County Convention Center. With 500 exhibits featuring experts in everything from remodeling to decorating to landscaping, the show is the largest consumer home and garden show in the area. Meaning you shouldn't miss out if you're big on flowers and such. Don't be surprised if you run into an "as seen on TV" HGTV show host; they'll be roaming all over the place. (10 a.m.-9 p.m. Friday and Saturday, 10 a.m.-6 p.m. Sunday at Orange County Convention Center North Building; free-$9; www.orlandohomeshow.com) 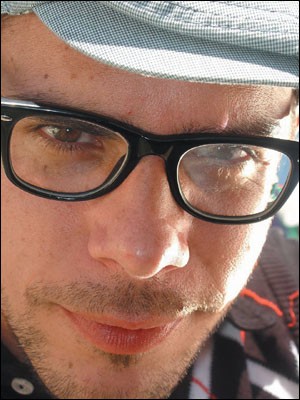 JAVIER GARCIA We're a little torn about talking up this show, as the prospect is so bizarre it took us a while to actually believe it's happening. Now, we don't mean to slight AKA Lounge – we love the place and they do a great job supporting local music. However, that support for local music means that the live shows there are usually just that: local music. Javier Garcia is not local; he's a well-known Latin rocker with a global fan base, an album produced by one of the genre's most reputable knob-twiddlers (Gustavo Santaolalla … yeah, the Brokeback Mountain score composer) and a new disc of madly infectious, Cuban-influenced rock that's as defiantly modern as it is goofily fun. (It hasn't left our player since it came out last year.) And, like, he's playing the tiny little AKA Lounge on a Friday night. We'd love to implore everyone to go check him out, because he's truly quite amazing, but we don't want to risk not being able to get in the door. (with Urbe Prima, Solares; 9 p.m. at AKA Lounge; $5; 407-839-3707)

WHITE: THE LIGHT BEYOND New Vision Cirque and Dance Company comes to town with a stellar reputation and a resume of impressive performances – the 2002 Oscars, the 2003 and 2004 MTV Video Music Awards, parties for Donald Trump at Mar-a-lago, to name a few. Having recently made Orlando their hometown, the "aerial artistry and modern dance" troupe – drawing from classical ballet, contemporary dance and some jazz touches – will debut the story of a woman who's caught between life and death battling between demons and angels. (7 p.m. Friday and Saturday, 2 p.m. Saturday at The Plaza Theatre; $28-$80; 407-228-1220; www.theplazatheatre.com)

MARGOT & THE NUCLEAR SO AND SO'S You can learn a lot about a band from their name, and this unwieldy and seemingly vapid moniker is a good peek inside the band that claims it. Rather than a stupid, vaguely new wave girl band, M&TNSS is actually named after a character in the The Royal Tenenbaums, and the music they play is an appropriately morbid and cynical take on chamber pop, complete with strings and attitude. (with South, Something For Rockets, Nine Black Alps; 9 p.m. at The Social; $15; 407-246-1419)

SURF MADNESS NIGHT It's not often that those of us away from the beach have the opportunity to rock out to a live surf rock band while getting an eyeful of actual belly buttons and tan legs (rather than simply imagining a tropical paradise in a dingy rock club). Surf Madness Night, a combo bikini fashion show (launching a new line of beachwear by Vicky Rios) and concert (featuring L.A. natives Slacktone with locals The Thrusters), offers that drool-inducing blend of sights and sounds – minus the sand and chance of sunburn. As one poster promises, the Slacktone-Thrusters live show will deliver a "primitive orgy of surf sound." Bikinis, bands and imbibement in a plush atmosphere – and no cover charge? Good vibrations indeed. (10:30 p.m. at the Westin Grand Bohemian; free; 407-313-9000)

DIAMOND FOREVER With all the cover bands and tribute acts flooding concert venues around here (see Classic Albums Live, Badfish, Posin, Darkstar Orchestra, et al), we've decided to just give in and embrace the schmaltz. It's not like we could've afforded to see the real Neil deal anyway, so this is the next-best thing, however creepy and surreal it may be. Local Diamond-miner Jack Berrios dons the Jazz Singer persona, accompanied by Reba McEntire, Tina Turner, Shania Twain and Martina McBride impersonators – and there's even a chance a Billy Idol doppelgänger may enter the fray. Berrios is sure to visit all the standards: "I Am, I Said," "America," "Love on the Rocks" (ain't no big surprise there), so turn on your heartlight now. Perhaps a moonlighting gig is in our cards? (7 p.m. at Central Florida Performing Arts Center, Sanford; $10, $12; 407-402-4347)

SPIN CITY CLASSIC If you're around Orange Avenue, Robinson Street, Rosalind Avenue or Central Boulevard, you may think that the pedicabs are moving especially fast this evening, but in fact it's the 5th annual Spin City Classic. The event brings pedal-pushers from across the state out to compete in races for men, women and even a heat for the kiddies. Don't remember the last Spin City Classic? That's because it was called the Festival of Speed last year. Organizers wanted the name to be more descriptive of the event, though we liked the original name better for more illicit reasons. In any event, we find a cycling event in Orlando a touch ironic for a city that gets consistently tagged with one of the highest pedestrian fatalities per person per year. Perhaps that could be a feature of next year's race – dodging SUV drivers on cell phones. Either way, look for riders drafting through the (spin?) city streets, whether you're stumbling home drunk or snorting crank in your Hummer. (2 p.m.-10 p.m. Saturday; downtown Orlando; also 9 a.m.-5 p.m. Sunday, Southport Park, Daetwyler Drive and Landstreet Road; free; 407-648-4900)

IVY QUEEN One of the earliest explorers of the reggaeton sound, this Puerto Rican firecracker gives off an absolutely perfect vibe of down-with-anything trashiness and bust-your-teeth-in superiority. She's been in the game a long time and it shows in her swagger, as well as in her inimitable flow, a delivery that shames the many imitators – male and female – that are pouring into the scene as of late. Another surprisingly excellent part of Sea World's surprisingly excellent "Viva La Musica" lineup for this year. (4 p.m. at SeaWorld; free with park admission; 407-351-3600)

CENTRO-MATIC/NEW ROMAN TIMES Sure we're excited about seeing Centro-Matic; it's been awhile since Will Johnson rolled his twangy, atmospheric caravan through town. But it's also been a hell of a long time since New Roman Times played in their own hometown, and we're interested to see what a revised lineup (including Phil Longo of the Country Slashers) and time off has done to their increasingly dramatic indie-rock sound. With the well-worth-the-hype Great Lake Swimmers on the bill as well, this is definitely the place to be tonight, boys and girls. (with Great Lake Swimmers; 8 p.m. at Will's Pub; $8; 407-898-5070)

T&A KARAOKE Should we feel especially let down that the butts and breasts on display in The Peacock Room's newly revamped "T&A Karaoke" night are mere plastic stage decorations – you know, the kinds of wacky prosthetics that customarily protrude from Halloween costumes like "Funny/Sexy Hospital Patient"? Not if co-host Tammy Kopko has her way and future contestants start really letting their hair down while belting out their favorite tunes. "You can do whatever you want," Kopko advises, counting on her widely admired abilities as a "crowd igniter" to inspire the requisite anarchy. Tonight's installment of the twice-monthly event carries a "TV Land" theme, raising our hopes that some pants-less wonder will win the grand prize (a $25 bar tab) by singing the theme from Baretta while wearing a plastic cockatoo as a strap-on accessory. Dare to dream … (10 p.m. at The Peacock Room; free; 407-228-0048)