ACLU v. Liberty Counsel, part one. Perhaps Mat Staver has too much time on his hands. Isn't there a woman trying to get an abortion somewhere to harass? Or maybe a gay couple that wants to hold hands in public? Perhaps there's a biology teacher on the cusp of discussing evolution who could be silenced with a quick, legal-sounding dispatch?

Apparently not, because Staver's conservative law firm and their clients, Orlando's own Exodus International, recently launched a full-throttle assault on a blog you've never heard of: www.justinsomnia.org.

The site is run by Justin Watt, a 26-year-old who works for a publishing company in California. "I don't see the blog as (political)," Watt tells Happytown™. And, for the most part, it's not. One item discusses a hiking trip he recently took with his sister. But now and again, Watt waxes political when he reads or sees something he finds offensive. Blogs are like that.

Last September, Watt came upon another blog that had yanked a picture of an Exodus International billboard that we here in Happytown™ are quite familiar with. It was one of the two billboards that the ex-gay group put on South Orange Blossom Trail near The Parliament House earlier in 2005. "Gay? Unhappy?" the billboard asks in big, red letters. The billboard directs you to Exodus' website.

Watt's reaction was "visceral." No, he's not gay (though he did go hiking with his sister … hmmm). He's just the kind of guy who thinks intolerance should be answered. So he grabbed the billboard picture, ran it through Photoshop, and 15 minutes later had himself a parody. The twiddled-with version reads: "Straight? Unhappy? www.gay.com."

For four months, the parody lay dormant in Watt's archives. Then in February, another website, www.exgaywatch.com, found the parody (Watt says probably through a Google search) and put it on their site. Two days later, Staver sent cease-and-desist letters to Watt and www.exgaywatch.com.

In a four-paragraph letter, Staver told Watt that he was violating Exodus' intellectual property rights and "substantially diminish[ing] the potential value of the original image." Staver also warned ominously that fair use laws didn't cover this sort of parody.

The ex-gay watch site took the parody down. Watt contacted four intellectual property experts from the ACLU and the San Francisco law firm Fenwick & West, all of whom agreed to take the case pro bono. On March 22, attorney Laurence Pulgram sent Staver a stinging rebuttal in the form of a four-page letter that delves into the intricacies of parody law and, in so many words, tells Staver to blow it out his ass.

"While Exodus has the right to articulate its views on sexual orientation, copyright does not immunize its work from comment or criticism," Pulgram wrote. "It thus provides Exodus no entitlement to censor Mr. Watt's speech on the same subject."

Watt's site gets about 2,000 visitors a day, he says – and that's gone up considerably since the Liberty Counsel stuck its nose into this affair. Exodus dropped the matter March 24, after Watt removed the Exodus logo from his parody. Both USA Today and The New York Times have run stories on the imbroglio, but as of March 28, not a peep was heard from our hometown paper, the Orlando Sentinel.

ACLU v. Liberty Counsel, part two. But all was not bad news for the homo haters last week. The Florida Supreme Court approved the Florida Coalition to Protect Marriage's proposed constitutional amendment to ban gay marriage, over the objections of ACLU attorneys who argued that the amendment might also ban civil unions and thus violated the state's single-subject rule for constitutional amendments.

"I have no doubt that this marriage amendment will pass by an overwhelming majority," Staver declared in a press release. Staver and the Liberty Counsel spearheaded this proposed amendment.

But for those of you who don't think two gay guys tying the knot portends the end of life as we know it, take heart. After all, while the coalition may well see its amendment on the ballot in 2008, it failed – by a long shot, no less – to get enough signatures to make the November 2006 ballot. Perhaps there's not as much support out there as Staver thinks.

On March 22, the city's Community Redevelopment Agency advisory board rejected both bids to redevelop Otey Place, a vacant 3.5 acre chunk of land across the street from the Centroplex. But because bad ideas never really die, city staffers will forge ahead anyway, and on April 3 try to convince the city council to overrule the advisory committee and give the bid to PSA Constructors Inc. PSA can probably count one vote in the bag: Daisy Lynum, who serves on the board of directors for the Black Business Investment Fund, one of PSA's partners. Stay tuned.

WHO DELIVERED THE APPLES?
Somebody left two apples at our office this week for A&C editor/Dog Playing Poker author Steve Schneider. A witness to the drop off described the gifter as an "attractive woman." If you have any information about this fruit, contact [email protected]. Not only is our curiousity killing us, but we're running out of fruit. 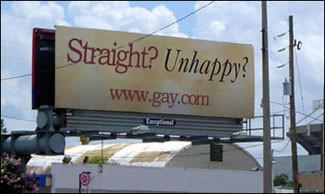 Time for a LYNX flashback! A few years back – before my current LYNX stint, which began after my car got totaled last summer – I rode the bus, often early in the morning when I got off my graveyard shift as a security officer in Maitland. So one Saturday, around 7 a.m., I found myself downtown at a bus stop surrounded by banks and places with the word "trade" in the name. I heard a noise.

"Hey," said a guy standing behind a pillar. Keep in mind, that this being an early weekend morning, downtown was practically deserted.

"I'll give ya five dollahs if ya suck my dick."

So he makes a counteroffer: "I'll suck yo dick for five dollahs."

Again, I graciously declined. So he thinks about it and comes back again.

"You got a cigarette?"

Since I couldn't help him, the guy went on his way. Unfortunately (or perhaps fortunately), this is my only story involving anyone wanting any kind of sex with me on or near a LYNX bus.