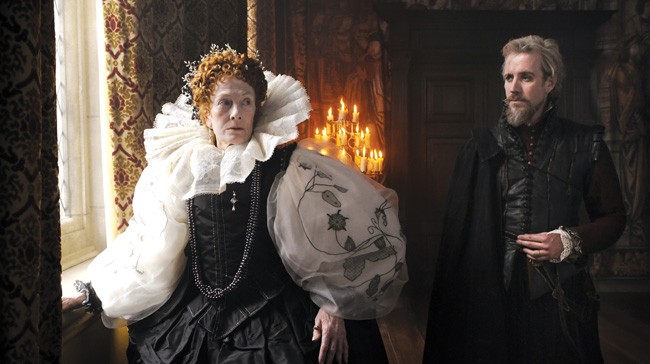 Director Roland Emmerich’s new film opens and closes at a modern theater. The curtain draws and, before a polite crowd dressed in their Sunday best, a narrator sets the scene. It’s a strange yet wholly fitting framing device: Emmerich, the merchant of spectacle responsible for Independence Day and The Day After Tomorrow, is indeed about to embark on an alternate-history retelling of Elizabethan-era theater and one William Shakespeare’s effect on the body politic. It’s a way of at once acknowledging the filmmaker’s lot as an oft-castigated storyteller of the people and slyly drawing a comparison between his mass-audience brand of crowd pleasing and the bawdy Bard’s naked appeals to the rabid groundlings of his time. An apology and a self-serving statement in one fell swoop: Kudos, Mr. Emmerich.

The trick also recalls beautifully a not-so-distant time when the theater was a sweltering hotspot of political intrigue, crucial social satire and a potentially deadly nightly activity. (Google the Astor Place Riot for an Emmerich-worthy true story of Shakespeare and murder.) That’s the world in which we’re steeped in this gripping powerhouse of historical fiction that posits Shakespeare as nothing but an illiterate puppet charged with being the public stand-in for Edward de Vere, Earl of Oxford (Rhys Ifans in one of his best roles), a secretly brilliant playwright and poet who also happens to be one of Queen Elizabeth’s (Vanessa Redgrave) lovers and brother-in-law of hunchbacked Lord William Cecil (David Thewlis), a dark adviser to the Queen.

According to the tight, compelling screenplay written by John Orloff (or was it?), de Vere and the Queen had a love child who might hold a claim to her throne – an unacceptable development for Cecil, who’s in cahoots with James I, son of Mary, Queen of Scots, who famously plotted to kill Elizabeth. Believing deeply that words bring about change more effectively than actions, the Earl enlists Shakespeare to put on these plays and attach his name to them. (One of the film’s only chuckle-worthy moments comes when de Vere reveals a shelf full of manuscripts that amount to the complete works of Shakespeare.)

What follows is a shockingly coherent and thrilling “What if?” scenario that, while patently ridiculous (though maybe not to conspiracy theorists), sets the stage for laudable set pieces and builds its stakes gradually until no less than the fate of the country rests with those plays and their attendees/political pawns. Emmerich’s grand scope actually assists here and calls to mind the sweeping historical dramas of Alan Parker (Evita) and Milos Forman (Amadeus).

Ifans delivers an Oscar-worthy tour de force as de Vere (played as a young man equally well by go-to castle dweller Sebastian Armesto). He’s tortured by his talent; groomed as he is for greatness (and, it’s suggested, potential royalty), his passion for the written word is played like a curse, keeping him from tending to his estate and his family. And as scene-chewing as Redgrave is, the actress’ real-life daughter, Joely Richardson, is intoxicating as the young queen. An avid lover of the arts (much to the chagrin of the Cecils), Richardson allows us glimpses of an indecisive ruler as much a slave to her loins as her father was.

One could have expected a sexier throne under Emmerich’s guiding hand, but the disaster maestro’s keen ear for intrigue and immersive yet glossy treatment of a controversial topic is beyond a pleasant surprise – it’s a revelation.