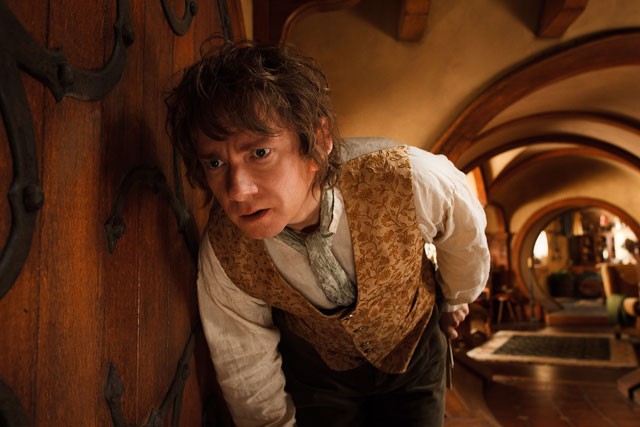 There's a point where it seems that some directors can no longer be told no. In translating J.R.R. Tolkien to the big screen, Peter Jackson appears to be one of those directors, which is a shame because, buried beneath its bloated two-hour-and-46-minute run time, there's an entertaining two-hour movie here.

Set 60 years before The Lord of the Rings, this movie follows Bilbo Baggins (Martin Freeman) as he's recruited by Gandalf the Grey (Ian McKellen) to join a company of 13 dwarves, led by Thorin Oakenshield (Richard Armitage), on their quest to reclaim the lost Dwarf Kingdom of Erebor from the fire-breathing dragon Smaug. Middle Earth is greener and more peaceful than depicted in The Lord of the Rings, but that doesn't mean the journey lacks for danger. There are goblins, orcs, trolls, wolflike wargs and even stone giants that send the merry band scurrying through dark forests, treacherous mountains and underground caves. And, of course, Gollum, the creature that forever changes both Bilbo and his nephew Frodo's lives.

Once the story is painstakingly set in motion, Bilbo's adventures fall into a rigid formula of dramatic peaks and valleys, mimicking the episodic cliffhanger structure of a bedtime story. The group travels to a new and strange location, picks up a tidbit of information, runs into peril, flees in an action-packed chase scene, is cornered by the enemy and then miraculously rescued at the last moment. Everything feels padded, as if Jackson is purposely stalling the dwarves' quest in order to justify his next two sequels.

His chase-capture-escape plotting may be a tried-and-true (if overly simplistic) form of storytelling, but it never achieves the epic sweep, sense of wonder or emotional investment of the LOTR films. We've seen many of these places and creatures before, and though the digital effects have greatly improved over the last decade, they no longer have the wow factor that accompanied the original trilogy. It could even be argued that, like Lucas' Star Wars prequels, Jackson relies a bit too much on CGI replacing tactile environments and actors in make-up with digital creations. Personally, I preferred seeing actors who played orcs rather than the effects – impressive as they may be – on display here.

More importantly, however, the stakes in The Hobbit simply aren't high enough. Bilbo and his companions lack dramatic agency. Whereas Frodo's journey involved a series of small missions in service of a larger goal, An Unexpected Journey is just a bunch of stuff that happens on the road to Lonely Mountain.

Despite its shortcomings, The Hobbit will undoubtedly delight fantasy fans with its boisterous pell-mell pursuits, wild slides through underground tunnels and feverishly pitched battles. The 3-D is first-rate, and though many of the scenes go on too long, they are visually inventive and dramatically exciting. An encounter with a trio of hungry trolls is great fun, the realm of the Goblin King (an amazing creation) plays like a high-wire, rickety rollercoaster ride, and Thorin's nemesis, Azog the Defiler, is an effectively nefarious foe.

Like Star Wars, the Twilight films, and The Hunger Games, The Hobbit: An Unexpected Journey will inevitably prove to be critic-proof; there's a reason the novel has sold more than 100 million copies. Though the movie doesn't always seem to know what it wants to be, awkwardly shifting between the lighter tone of the novel and the epic melodrama of the trilogy, it knows exactly who it was made for: Anyone with 10 bucks in his pocket and a hankering to return to Tolkien's Middle Earth.