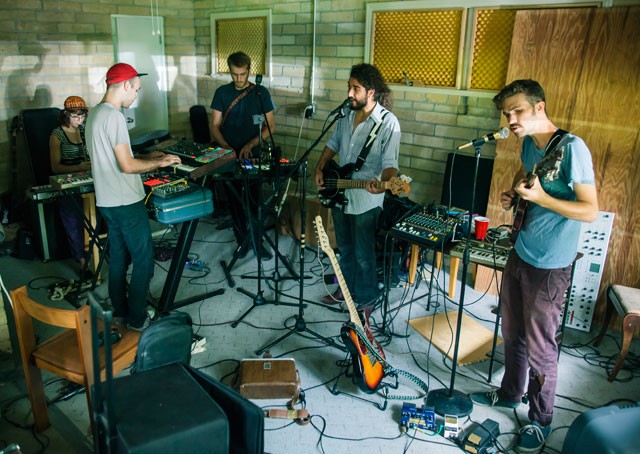 On paper, Levek is the artistic vehicle for 24-year-old musician-composer-producer David Levesque, who once lived in Orlando and had already made some waves in the indie world with his quirky tropical sound. Look a Little Closer, a self-produced full-length album released on Sept. 25, thrusts Levek – who was written up in August by Paste magazine as one of 10 Florida musical acts to watch – into an even brighter spotlight. It was released on legit label Lefse Records (which has also put out music by national notables like Neon Indian, Youth Lagoon and How to Dress Well) and the album is already earning Levek some serious bona fides.

Levesque was born in Jordan and transplanted to Florida at the age of 7. For the past three years, he's lived in Gainesville – a city whose rich arts scene helped cultivate the sound of the band (of which Levesque is the backbone, playing with a cast of musicians that has changed over the years). Before Levek's national coming-out, the act had been making ripples through the scenes of the various Florida cities where Levesque lived, including Orlando, where he still plays frequently.

Over the years, Levek's multifaceted sound has evolved from the haunting and spare melodies set against a wash of primitive, almost tribal, backdrops that were the hallmark of his 2009 demo, LVK. Look a Little Closer reveals a fuller, more evolved sound, the fruit of devoted years of sonic incubation in Gainesville's art scene – one that's fertile enough to position itself as the next Florida community to make a credible bid on the national stage.

David Levesque always wanted to be in a band. In fact, a random invitation to join Gainesville's Oh Fortuna on drums several years ago is what urged him to move north. There, he found an engaged, progressive scene that provided him with not only inspiration but access to the resources he'd need to fully develop his own rather specific music.

First, there were fellow players and collaborators, the best of whom he sought to recruit. "I tried to bring in as many of my talented friends just in general to come and play on the album," says Levesque. "I think we had a total of around 15." In fact, the entire cast of Hundred Waters – a Gainesville band that's making big waves of their own; on Oct. 16 their album will debut on Skrillex's OWSLA label – was in Levek before they branched out on their own. Now, Levek has a more settled and permanent six-member lineup that includes Levesque himself, noted Orlando musician Gerald Perez (aka Maximino, bass), J.P. Wright (guitar), Amy Douglas (keyboards, clarinet, wind instruments), Alex Crook (drums) and Tristan Whitehill (synthesizers).

The new album this lineup released is a sophisticated, dream-laced pop vision wrapped in rich, surrounding dimensionality. It's adorned with fine, earthy hand-detailing, but it moves with otherworldly fluidity. Both the advanced technique and the range of colors within – jazz, abstract pop, tropical, funk, British folk, French cinema – indicate a studious musical mind. The result is at once post-modern and forward-thinking.

In recording Look a Little Closer, Levek had a real commercial studio to work with in Gainesville's Medusa Productions. This asset was key to the ambitions of an exacting soundscaper like Levesque. "I would say the composition, all that stuff, was heavily influenced by those old '70s compositions," he says of his sound. "I feel like back in those days they just had the best equipment around. ... We keep on moving onto getting higher quality and everything, y'know, HD recording and all this stuff, but there's just something about those 2-inch tape recordings that I'm real into that those guys were using. As far as compositionally, I felt like I already kind of had a similar mindset. And then when I discovered them, I was just, like, this is what I do."

But back to that album title. Although planted deep enough that unwitting listeners would cobble together little more than a vague emotional impression, Look a Little Closer is a concept album. "It wasn't supposed to be," Levesque says. "I wrote the first two songs and realized they were both about somebody I hold very dear struggling with mental illness. And I was just like, I have to write this for her. So the whole album and everything is about her journey." The lyrics and curious musical turns on the record suddenly take on new meaning and gravity.

"It's very much based around how things can so quickly change," he says. "And you can be attached to one thing one day and then be completely on another plane the other day. It's very rapid, that's just how it works ... up and down, up and down, you know? As far as bipolar goes, that's kind of how it works. I was also trying to reflect the instrumentation and the whole overall concept of the album. Bipolar is that concept."

That odyssey unfolds and wends through the fiber and course of the album. "It's about her incline into society and how she interacts with people and stuff like that," says Levesque. And by the closing song – a cinematic, gold-bleached '60s French breeze – he says, "It's a flashback back to before she was diagnosed with bipolar, when we were younger. It was a memory of when we were younger. It kind of comes full circle, I guess."

Levek may be Levesque's project, but he's the first to point out that the act's success relies on collaboration – not only of the musicians in the band, but also of the local community that he credits with supporting the band. For instance, he names groups like the Milagros Art Collective and Gainesville's Church of Holy Colors gallery, who did the album's artwork, when he talks about the support and collaboration so important to his work. "The community that I've experienced, that's kind of what I wanted to bring to the table," he says. "Just bringing in a lot of friends from Florida to be involved in the artwork for the album, as well as everything else involved with it."

If there's anything that marks both Levek the band and Levesque the man, it's terroir of the spirit, a Sunshine State of mind. "I feel like Florida is in a really great place, actually, right now," he says. "I can only speak from a Gainesvillean's perspective, but as far as what we're doing to help bring all these people up, it's just creating the perfect atmosphere for a musician to be influenced by others and create themselves and have spaces for them to do that, you know? And I think that's only gonna make the scene grow. And there are so many bands right now, at least in Gainesville, and what I've seen from Orlando and other parts of the state, that are just incredible. There's definitely so much potential going on."