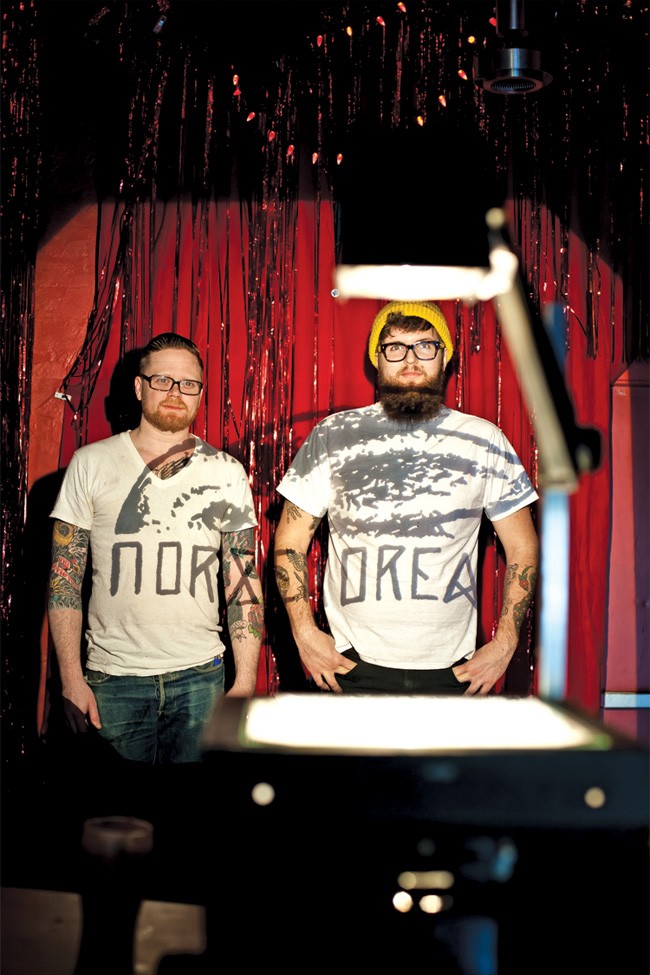 To all but music-scene insiders, the figures who organize concerts around Orlando can seem like shadowy forces, but their influence shapes the cultural landscape in fundamental ways. When they’re bad, or simply uninspired, the city’s name loses stock. When they’re good, they can spark and catalyze an entire scene. More than almost anyone else in the indie circuit for the past year, Norse Korea Presents has been a paragon of the latter.

Under the Norse Korea name, the two-man group – comprised of Orlando movers Bradley Ryan and Kyle Raker – administers booking and runs promotions and a music label. As a DJ for WPRK 91.5, Ryan was a fixture at live shows, which led to an internship and eventual job at venerable music venue the Social for two years. Raker, also part of the local community as both a fan and a musician, worked for influential promoter Parafora Presents and downtown club Back Booth for a year. After cutting their respective teeth under the tutelage of some of the city’s top names in indie booking, their paths officially converged last year when Ryan approached Raker with the idea for Norse Korea.

Despite N.K.’s vault into the underground glitterati over the past year, their perspective and ethos remain grounded. “One thing that drew us together was the fact that we were seeing each other at the same shows,” Raker says. “And I think we kind of wanted to keep that going. Not just putting on shows, but also supporting the scene within it; being members of the music scene, not just someone behind it.”

That’s why, when they teamed up, their outlook was firmly rooted in this experience. “I, as an audience member, never really saw too many people that were behind the scenes of booking shows in Orlando at shows,” Ryan says. “And that’s definitely one thing with Norse Korea that we want to drive into the ground is that we are here, we are local, we are absolutely common dudes. We’re drinking the same crappy beer as everyone else.”

In only a matter of months, Ryan and Raker’s legitimacy separated them from the sea of promoter pretenders. “We learned from people who were doing it for a living and kind of had instruction from them and learned from them,” Raker says. “So we didn’t come into it completely green.”

Besides a refreshingly high degree of musical taste, their operating procedure quickly distinguished them by straddling the often mutually exclusive approaches of DIY and professional – an optimal balance that no one in the city’s recent history has been able to certifiably strike. The foundation and flexibility it’s given N.K. has yielded surprising results in the form of a long and varied list of head-turning shows by artists including Thee Oh Sees, Surf City, Young Widows, Hunx & His Punx, Lil Daggers, Bare Wires, Capsule and Circle Takes the Square, among many others.

Their music label, NK Tapes, is entirely Bradley Ryan’s domain and focuses on Florida-based talent like the Band in Heaven and Flashlights. “I wanted to kind of start off a thing where the talents of Orlando and the surrounding areas were showcased,” Ryan says. “Since Post Records kind of went defunct, we’ve kind of had that void. I’ve been busy enough to where I haven’t been able to completely fill the void, but we’re actually lining up a lot of releases for 2012.” Those artists will include Abuse, Arc and Panther, Acoqui, Pseudo Kids and Permanent Nap.

On being a region-specific label, Ryan says, “I think that we have a lot of talent here, especially coming up – bands that just started – that we can sustain ourselves as just a regional label for the foreseeable future at least.”

But N.K.’s profile as a tastemaking household name in Orlando’s indie scene can distort the perception of their reality. “We both still have jobs outside of booking,” Ryan says. “Kyle bartends and I put groceries in a bag. We can’t necessarily say it’s paying my rent. Hopefully, one day it does, but we’re enjoying it for right now.” That sentiment – culture first, commerce second – is something to which any committed art-minded person will attest.

Despite not quite being in the financial black yet, there’ve been some non-monetary payoffs. For Raker, it’s “seeing people really enjoy and get into something you put together in [an] animated fashion. And not just nodding their heads, but going crazy at shows.” Ryan says, “Definitely one of my peak moments of 2011, and Norse Korea [in general], is moshing at a show that I booked, because I don’t know a single promoter in town who would just mosh to the show that they booked.”

Although their disposition going in was constructive, their experience over the past year in the production end of Orlando’s music scene has only deepened their belief and intensified their rallying cry. “Unfortunately, I’ve heard things said by Orlando promoters that we’re a second-rate market at best,” Ryan says. “If you let people think that, they’re gonna think that and nothing’s ever going to happen.” He counters, “We’ve got enough steam behind us to where it’s pretty inspiring.”

They recognize, however, that the music community still needs work in terms of dismantling barriers and magnifying cooperation. “Go to other people’s shows,” urges Raker. “Support one another. Don’t just expect people to come to your shows. The more that you give, the more you’re gonna get. I know it sounds trite but, whatever, it’s true.” In fact, the fiercely local-minded N.K. guys frequently name-drop other active people and places in the scene who share their enthusiasm and gratitude, entities like Will’s Pub, Substance, Floridas Dying, Orlandooom, the Mills Ave. corridor and countless bands.

“If we’re to become anything in Orlando, we need to embrace our differences,” Ryan says. “Hopefully, things come together and people realize that we need to embrace what we have right now because it’s really a precious thing. We’re on an upswing that I personally believe in to a pretty great degree.”

And that sense of endeavor and conviction has shown in N.K.’s already considerable body of work. “We’re so, so, so, so indebted to everyone that’s ever been to a show of ours,” Ryan beams. “I feel like I’ve gained more friends this past year than any other year in my life just because of all of the community support that we’ve had.”