Alexander Payne returns, seven years after Sideways, with his best film yet 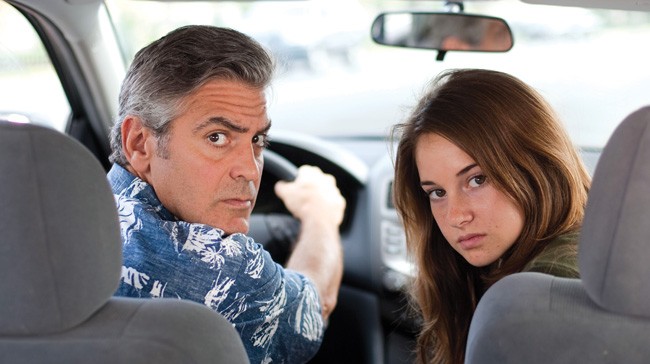 It’s a tiny, even bizarre detail, but I can pinpoint the precise moment I fell head-over-heels in love with Alexander Payne’s first film since his Oscar-winning Sideways seven years ago: It happened the second that actor Robert Forster first appears.

See, throughout The Descendants, star George Clooney is made up to appear older, as bedraggled and downright awkward as a devastatingly handsome A-list movie star can ever appear. His eyebrows are made bushier and blacker, while his trademark salt-and-pepper locks emphasize the salt. He has a bit of a paunch and his gait suggests not a war wound so much as a self-mythologized sports injury. It’s a remarkable physical transformation, one of subtlety and back-story homework. And all I could think was how much he looked like Robert Forster.

When Forster appears as the cranky father of Clooney’s wife, who is lying in a coma from just beyond the opening seconds till the bitter end of The Descendants and is thus unable to convey her own story directly, I smiled and, admittedly, became choked up. Here, Payne has told me something he didn’t need to, but possibly just wanted to: The dying wife married her father. Perhaps that’s why she felt so compelled to leave him.

The Descendants is an almost dirge-like story about grief, but it’s so much more than that. Clooney plays Matt King, a Hawaiian real-estate baron, an absentee workaholic and the benefactor of 25,000 acres of pure paradise, which he inherited from island royalty who have passed it down through the generations. Due to legal snags, the time has come for him to either sell the land at tremendous profit for himself and his succubus cousins (including Beau Bridges as a cocktail-sipping Jimmy Buffett type) or keep it and risk it becoming worthless.

At the same time, his wife lies in a coma from a boating accident. King is told that she’s unresponsive and her living will asked that in this circumstance she be removed from life support. The movie finds him a man barely hanging on to sanity, thrust as he is – a self-described “back-up parent” – into the role of sole provider to 10-year-old Scottie (Amara Miller) and 17-year-old Alexandra (The Secret Life of the American Teenager’s Shailene Woodley).

Oh, and it turns out that his wife was cheating on him. So there’s that.

With all this on his plate – and a tag-along friend of Alexandra’s, stoner fool Sid (Nick Krause), who couldn’t endear himself to a puppy if he wanted to – Matt could easily succumb to the roiling bitterness bubbling to the surface, but he makes something of a project of finding his wife’s lover. It’s on this mission that he discovers Alexandra’s secret weapon: teen bitchiness. As miraculously portrayed by Woodley, who may be the year’s second-biggest revelation (after Elizabeth Olson), she’s at the precise age at which she can slip into angelic or demonic modes depending upon her need. With her willowy figure and long, muted features, she appears more innocent than her record-setting usage of words like “twat” might imply. Dabbling in a private-school bad-girl persona, she and her mother have an embattled recent history, so Alexandra may have even more at stake in preserving and/or tainting her mother’s reputation than Matt, which makes her his perfect driving force and foil. At the same time, her potential for severe guilt-induced sorrow is great, making Matt’s job a delightfully tense tightrope-walking trick. (Payne is clearly taken with Woodley’s abilities. She’s the subject of a shot – which the trailer spoils but I won’t – that I’ve never seen before.)

It’s the small details in The Descendants that add up to more than the sum of its parts, and it’s Payne’s assured hand that delivers them. It’s a triumph for all, especially the audience.