By Billy Manes and Jeff Gore 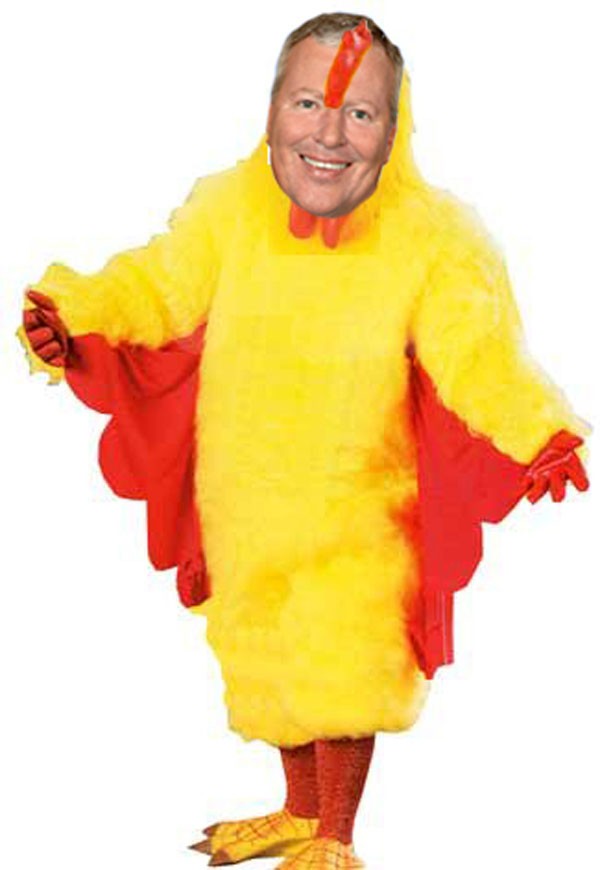 The sky is falling! The sky is falling!You know those Chicken Little weeks where it feels like every synaptic click in your head is like a sharp iron filing flying by you - or through you - on your personal sidewalk-race toward the end of the world? Well, last week was a lot like that, except vertical and horizontal and on a violently fast track. "Oh dear," you might have stroked your scarred arms while climbing out of fetal position on Saturday. "It could be worse. I could be Orlando Mayor Buddy Dyer."

That's right, even as the rest of us were staring in awe at the comet storm of political disappointments - most notably the abrupt Feb. 16 end of the high-speed rail saga, brought on by a certain governor whom nobody likes - Dyer and his gobble-neck were on a collision course with nearly all of his lofty ambitions. First came the continued run-off from the county's scathing assessment of the performing arts center project: assurances from the mayor that everything was going to be OK, some seeming acquiescence by county Mayor Teresa Jacobs that she might be able to make things OK, a trance-like pacing through his head that everything would indeed be OK, gobble. But then, with that wound yet to even scab over, Gov. Rick Scott rebuked the $2.4 billion for the Orlando-Tampa section of the mayor's beloved rail project, leading hizzoner  Dyer once again to the e-mail machine with more blind assurances: "I remain committed to doing everything possible," he wrote; maybe Skeletor will reconsider; everything's going to be OK, gobble.

And only because insult loves a little bit of injury, Friday brought the Sentinel's breaking news that District 1 Commissioner Phil "Squinty" Diamond would be a likely mayoral foe in the coming 2012 municipal elections, meaning the fiscally conservative Democrat who has frequently drawn the mayor's ire would now be kicking a dying horse's (chicken's?) ass. "That's funny," we thought through our teeth. "We just asked Diamond that question on Tuesday." Also, while reporting for that very story which afforded us some time on the Diamond line (a little political piece out next week), we got vague - and slightly smug - clues from city staff that Diamond's announcement was probable, mostly followed by audible rolled eyes. Diamond's response to our direct query was something in the "no comment" vein, so we moved along. Thanks, Phil. We thought we had something special. Sigh.

It wasn't all for naught, however. Diamond did point us in the direction of his handy bathroom reading, the Feb. 14 issue of Forbes, where there was a little Orlando Magic puff-piece called "Orlando's New Magic Kingdom." If you read that piece at precisely the right angle, you can hear Alex Martins, Orlando Magic chief operating officer (and hair helmet), recount the whole 2006 venues deal as sort of a farce to get an arena built for  Rich "Rich" DeVos on the public dime, devil (or DPAC) may care. "The DeVos family shouldn't be the face of the campaign," is the quote, followed by the story's author's paraphrasing, "so it wouldn't be billionaires begging taxpayers for money." According to a certain city source, the Magic hired pollsters to lobby commissioners with numbers showing public support for the arena with a performing arts center and without, an act that ultimately ended with Diamond being the lone "no" vote on the deal and, well, no performing arts center. Wait, you mean the whole thing was a sham? Yes. Also, Dyer's done. Shine on, you crazy Diamond. Shine on.

It was the morning of Feb. 18 when we heard that Sen. Marco Rubio would be speaking in Orlando - in one hour! When we arrived, makeup smudged, our conspiratorial notions of an intentional clusterfuck were reinforced by the venue - a cluttered lobby about 15 feet deep made even narrower by tables groaning with pamphlets and shrinkwrapped pens. "Constituent open house" was the official name of the game - some information about little-known programs like Social Security and obscure agencies such as the Veterans Administration were available for the roughly seven average citizens that may have been in attendance.

The low turnout of Average Joes was a good thing for us, because there were already enough bureaucrats, reporters and lobbyists clogging the room. The intimacy of the setting meant that Rubio took about half an hour to wade through the crowd, cornered at various junctures by fans who received his wisdom in the form of tired anecdotes. "My daughter wants a horse, but I can't afford it," we overheard Rubio saying to one nodding fan, adding a few seconds later: "I just don't feel like borrowing any more money from the Chinese."

When Rubio finally took to the podium, he translated his Far Eastern/equestrian message into a simpler mantra: "The truth is, this country is going bankrupt." At some point it struck us how intensely odd the whole situation was; Marco Rubio, Tea Party darling and crusader against the national debt, talking about the need to curtail government spending directly in front of some of the behemoth bureaucratic albatrosses like Medicaid, which conservatives think we can do without.

So in the ensuing media powwow, after Channel 2's Greg Fox finally had his fill of Rubio, we slunk into his coveted spot, locked eyes with the Senator and asked, "So, those agencies in there, what are you going to do to them?"

"You're not going to solve the debt through discretionary spending reductions," he said. "You will only solve it by reforming Social Security and Medicare with the dual goals of getting the deficit under control and saving those programs, which I want to make sure exist when I retire."

As you may recall, the imposition of user fees at the popular Fleet Peeples dog park in Winter Park last fall had dog owners vowing to retaliate in the voting both. Well, March 8th will soon be upon us, and two seats on the Winter Park City Commission are up for grabs. Running for Seat 2 is local attorney and parks board member Bonnie Jackson, a woman outright loathed by many dog lovers. The last time that Jackson was around members of Friends of Fleet Peeples Park, the nonprofit that created the park's off-leash section, an hour-long kerfuffle ensued in which Jackson fielded the word "bitch," as well as an unsolicited touch on the wrist, to which she responded by filing battery charges. (Meanwhile, the dogs in attendance licked themselves.)

So with that in mind, we were hoping that when Jackson took the stage for a candidate's forum on Feb. 17, there would be plenty of seething dog owners (even dogs) there. Instead what we got was a tame, plodding, I-love-Winter-Park-too affair that made us realize that her opponent, Sarah Sprinkel, is very lucky to have the dog vote. Though looking quite dashing in her red pantsuit and keffiyeh, Sprinkel used the most bewildering anecdotes to answer the moderator's questions. When faced with "Are there any city ordinances that need to be enforced more effectively, and if so, how would you do it?" she cited a pearl of wisdom from one of the many anonymous individuals in her life: "The most compassionate people I know are those who see the world in shades of gray, not in black and white." So Winter Park!

But we're getting ahead of ourselves. The first question of the evening was about the "park user fees," with the term "dog" gingerly avoided. All three candidates besides Jackson came out against the fees, but Jackson stood her ground. "Our revenues since 2007 have declined by 10 percent. You can't start out in an economic downturn and start talking about eliminating user fees." Then, however, she said the revenue gained from the fees at Fleet Peeples Park would be put back into the park. We thought the contradictory remarks justified a raised eyebrow, but Sprinkel preferred the eye roll.

We know you've got the Sentinel's endorsement and the dog vote, Sprinkel, but beware: pride cometh before the fall. Also, don't wag the dog. She might be a bitch.